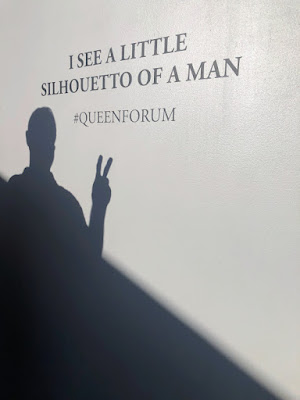 Saturday was a great summer day! Mary Kit and I had so much fun driving up from San Diego and kicking around at Disneyland during the day, and then driving over at sunset to The Fabulous Forum to see Queen + Adam Lambert. Take a look at the Twitter #QueenForum pics, videos and comments of simply a wonderful fan experience. Here is a setlist from the 7/20/19 show.

The Forum does a bang up job for the big acts by putting a band's famous lyric lines on the columns surrounding the building. (Pictured here is a shot Mary Kit took of me before the show.)

I've been to three big concerts this summer with ELO, Paul McCartney, and now Queen. All of these shows have been great family entertainment draws. As I've said before, classic rock 'n' roll now brings out three generations of fans which often includes mom, dad and the kids all coming together. Right in front of us, we had mom, dad and two teenage sons who were rocking out as much as their parents! I'm trying to picture my parents taking me to a rock concert in the 60's and that image simply does not compute.

Anyway, I can't say enough how much Adam Lambert brings to creating a whole new generation of Queen fans for the 21st century. Adam does a fantastic job in that he doesn't pretend to be Freddie Mercury but embodies his spirit in every song! I've read some comments from hard core fans who say Freddie can't ever be replaced and that is so true, but Freddie is also dead. (Still too soon?) Wouldn't you rather see Brian May and Roger Taylor play live with someone who's got the vocal chops and personality to masterfully keep Queen's music alive, if not thriving? And what a power triangle these three produce with the two legends in their early 70's playing and singing like their 37 (Adam's age) and Lambert's voice carrying the day in every classic song. There's nothing like going to a concert where you can see all this acted out in real time. As we were walking out after the show, I heard a guy say, "I never would've believed Adam Lambert was that damn great!" As an older fan, I was watching and thinking of Brian and Roger throughout the show and how all their hard work together with Adam is not just about making piles of money, but they still get to do their passion in the present and on the big stage. 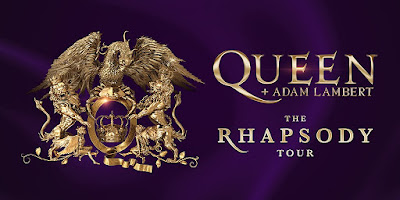 I hate to feature fan phone videos from the audience because of the sound and video quality, but I want to give you a little feel for Queen's two back to back shows in Los Angeles. I scoured the YouTubes here to find some worthy videos from the start of  The Rhapsody Tour which is sold out everywhere, not to mention the bump from the film Bohemian Rhapsody. Long live Queen!

Posted by Doug McIntosh at 7:16 AM