Dear Mr. Fantasy play us a tune
Something to make us all happy
Do anything, take us out of this gloom
Sing a song, play guitar, make it snappy
–Steve Winwood, Jim Capaldi, Chris Wood 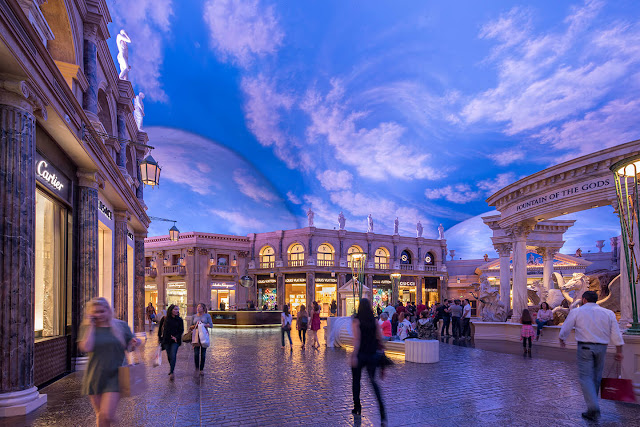 It's February 8, 2020 and Mary Kit and I are at Caesar's Palace in Las Vegas. We walk into the Forum Shops which is this huge indoor complex of stores and restaurants. We have dinner reservations at Trevi. Trevi is the open Italian restaurant next to the Fountain of the Gods and we have a wonderful dinner to the sound of splashing water that almost drowns out the sound of the horde of tourists around us. We are about to see Van Morrison at his sold-out residency at the Colosseum. The ceiling is a consumer's paradise with a fanciful painted sky designed to transport you to a different place, a different time...

COVID-19 is about to be a BIG THING, we just don't know it yet as we sit down to dinner with thousands of people around us, and then later see a wonderful concert. We come back to enjoy our hotel at the MGM Signature. The Lazy River pool is closed for winter, but we'll be back in late May to enjoy it when we come to see Sting on May 27th, and Sheryl Crow on May 28th...

It's March 15th and Mary Kit has gotten me an early birthday present, tickets to see Livingston Taylor at Humphreys Backstage Live. This is like a supper club, and we have seats up front about 10 feet from the stage. I have never seen Livingston live and looking forward to hearing songs like, Carolina Day. What a dinner, Mary Kit wants to mention the lobster bisque, and what a wonderful show! Livingston was fantastic, very engaging with the audience as you can see from the excellent footage I shot and spliced together with my iPhone...

It's March 24th and Mary Kit has gotten me another early birthday present, tickets to see Joan Osborne and The Weepies at Edmonds Center For The Arts in Washington. I have never seen Joan Osborne or the opening act The Weepies, but love both and couldn't wait to see them in this intimate 700 seat theater.

The Weepies performed one of my favorite songs, Take It From Me. I must say, the theater is a stickler about shooting video, and the usher did in fact take my phone away from me, but not before I got this...

Next up was Joan Osborne who also performed one of my favorite songs of all-time, One of Us. Now since they took my phone from me, Mary Kit put her coat in her lap and shot this very steady clip from under her coat, I must say this was great camera work, what a team! We also enjoyed our trip up to Seattle and got to have a big family get together and potluck with all of Mary Kit's kids and our grandchildren. We can't wait for our next visit...

It's May 8th and we get to see The Rolling Stones in our own backyard, just 5 minutes (a stones throw) down the road from us at Qualcomm Stadium (now called CCSomethingCreditUnion). If you remember my huge lament back in October 19, 2016, where the Stones had to cancel their concert because Mick developed 'Bad Laryngitis' at Coachella a few nights before. We had just arrived from San Diego on October 18th, got into our hotel when the news come to use via our iPhones. So now we finally got to see our rock heroes because lightening couldn't possibly strike us twice, right?

We both have never seen The Rolling Stones live before and couldn't wait to hear, You Can't Always Get What You Want. Anyway, the show was absolutely phenomenal! Here's an official 2003 clip of the song live, but it really doesn't matter because all these guys look exactly the same today, well Keith may have a few more deep wrinkles now.

It's just last week, May 27-28. Yes we are back in Las Vegas where I'm writing this blog. Man the Southwest flight was packed, but we took our Airborne Fruit Gummies before we left, so I think we're good.

First, we saw Sting at his residency at Caesar's Palace, just like Van Morrison back in February. Boy, time flies but other than the weather being warmer, everything is always the same in Lost Wages. Hey, the Lazy River was awesome and we even got those frozen rum pool drinks. My advise is not to have three and then get into fast moving water! Lesson learned.

Sting also looks the same as he did twenty years ago, maybe there really is something to that tantric thing? The show was great, but everybody was saying, Don't Stand So Close To Me, which is also a great song of his! Anyway, before the show, Sting was hanging out at one of the pools with a thousand friends, and this was a video I took on my phone as we just happened upon this cool party!

Then on May 28th, Sheryl Crow did a benefit concert for the Sands Cares INSPIRE charity at the Venetian. It was a great show and she did one of my favorites, Every Day Is A Winding Road. I was thinking about that song today as it can be appropriate for one's interpersonal life as well as for people enduring a crisis day in and day out.

Music is always at the heart of tapping at our core emotions. I love going to these live shows and experiencing an artist's music in a concert hall with an audience all together in a common spirit of joy and happiness. It would be so sad if something happened to take that all away, even if it was only for a year, could you imagine that! I know that's a weird thought, but sure makes me want to appreciate all the things like live music that we take for granted.

Sincerely yours,
Doug and Mary Kit

Now for all the concerts I have missed in my life, my friend Ron Zieman was telling me about the 2009 concert tour with Steve Winwood and Eric Clapton together. Ron said it was spectacular show at the MGM Grand in Las Vegas. That really would have been one to see, like so many others... Here's Steve Winwood and Eric Clapton performing, Dear Mr. Fantasy at the 2010 CrossRoads Guitar Festival.

Also, thanks to YouTube, the artists, and the concert goers who posted the live concert videos that I 'borrowed' for today's fantasy. Mary Kit and I hope to see all these musicians someday live in concert.
Posted by Doug McIntosh at 6:26 AM