Went to a Garden Party 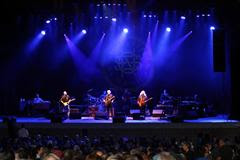 If you look at the tour schedules for bands and individuals from the 60's and 70's, you'll be amazed (or maybe not) of how many acts are still currently touring. It seems that 'older' rock 'n roll acts represent at least 50% of the current concerts, when in fact, most of these acts haven't had a hit in years. I don't need to ask why, as you already know, that the power of rock 'n roll is still very strong with the people who cut their teeth to the rhythm of acoustic and electric guitar.

In this past year, I have seen Crosby, Stills and Nash, The Eagles, Fleetwood Mac, Bette Midler and Gary Clark Jr., not to mention, Motown the Musical. In the coming months, I have tickets for Jackson Browne, Ringo Starr, Mark Knopfler, Don Henley and Shawn Colvin, Neil Young and Elton John. I love the music, the nostalgia and to see it live is just so special. I have and will continue to go to shows to hear hit songs from the past. Some of the songs are even a bit tiresome (if you read my blog last week), but live music gets your blood pumping and feeling part of a community, just having fun and enjoying the good vibrations. We are all blessed to celebrate music together in venues all over America.

In going to see all these great bands this past year, I thought about Rick Nelson, who like several other prominent music greats, died in a plane crash. I thought about all the great musicians that I will never see live. Rick Nelson's 1972 song, Garden Party, struck a chord with me in that we should always celebrate the old songs but also, embrace an artist's new songs with an open mind. I say this as several older musicians have come out with new music in 2015 (e.g. James Taylor, Neil Young), or will be coming out with a new album soon (e.g. Don Henley). This gives me inspiration to always be creating something new, even if you're an old dog. So let's all keep creating new stuff! However, at the same time I can't help but reflect, the good die young and it's sad we'll never get to hear new music from the likes of Patsy Cline, Buddy Holly, Stevie Ray Vaughn and Rick Nelson.

Anyway, I've never seen Jackson Browne live. I will finally get that pleasure on August 12th, here in San Diego. Whatever he chooses to play, it will be a gift.

Posted by Doug McIntosh at 7:36 AM