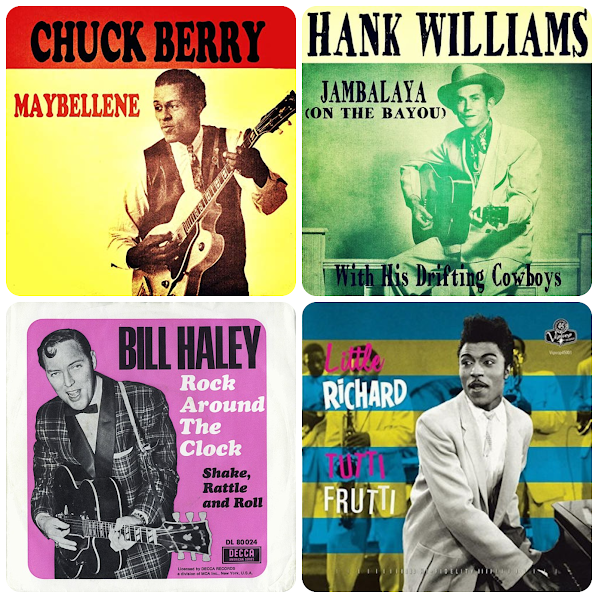 1952 through 1955 is a real transitional period in popular music. Rock 'n' roll is a baby as the dominate pop standard hits of the day come from singers like Patti Page, Frankie Lane, Tony Bennett, Frank Sinatra, Doris Day, Eddie Fisher, Perry Como, and Rosemary Clooney. However, the top record producers are guys like Mitch Miller ruling the airwaves with homogenized cheery tunes with little innovation or imagination. Remember, Sing A-Long With Mitch.

In the 1950's, emerging star Pat Boone would specialize in taking original R&B hits from black artists and cover them with softer arrangements for the larger white market. Boone was certainly not the first or last to capitalize on this practice, where the music money stream almost never flowed back to the source, the black musicians creating songs in the early to middle 20th century.

Let's take a look at some of the musical events and songs that would influence a generation growing up in the 1950's. Kids who would jump at the chance to get out of the house and into a car with friends listening to some new rock 'n' roll while cruising Broadway... and away from their Father Knows Best world.

July 6 — Elvis Presley releases his first single, 'That's All Right' [and the B side 'Blue Moon of Kentucky']. A month later, Billboard gives the song a positive review, with the reviewer calling Presley a "strong new talent," and by September is a No. 1 hit in Memphis.

1955 in Music
Enjoy my friends!
References - All Wikipedia
Posted by Doug McIntosh at November 15, 2021
Email ThisBlogThis!Share to TwitterShare to FacebookShare to Pinterest