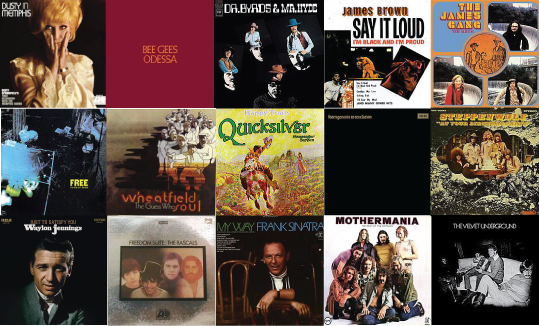 In March, 1969 I turned a restless and inexperienced 14 years old. I lived in a small town looking at the peace and love counter-culture from the outside, wanting in.

The March entry for Wikipedia's 1969 in Music is a great panoramic snapshot of what would make popular AM radio to the new hip bands from America and England finding their way to the FM side.

From that counter-culture side, you have bands recording nine minute jams and I'm just dreaming myself into the live Fillmore West scene in San Francisco.

On the pop side, I was a big fan of Dusty Springfield, and her Dusty in Memphis is such a knock out classic that I've featured it here in the playlist as my personal favorite of this grouping of albums.

As always, I've tried to put together a little eclectic mix and hope you enjoy the ride of March '69.

Posted by Doug McIntosh at March 25, 2019 No comments:
Email ThisBlogThis!Share to TwitterShare to FacebookShare to Pinterest
Labels: 1969, Dusty Springfield, Frank Sinatra, Genesis, The Bee Gees, The Guess Who, The James Gang, The Velvet Underground, Waylon Jennings

For the past several weeks I have been listening to a lot of new music, some put out by people with name recognition, but more so by folks who play Folk that I have never heard of before.

I use Amazon Music to do my digital fishing as I search the 'New Releases,' listen and determine- 'catch and release' or 'catch and keep' by the river of streams.


This week's playlist has 50 songs caught and kept from probably a steaming base of over 100 albums or so. Amazon does a nice job of breaking the New Releases into genres to get you to some smaller fishing spots.


I suggest you shift through my 50 songs here and if you are a fan of Americana music, you're going to find some new keepers to put in your own digital fish basket.

Note 1- The March, 1966 Field and Stream cover kind of looks like my dad. He loved his fishing!

Note 2- I was going to go back to Sunday School and somehow metaphorically weave Jesus and the fish and the loaves of bread, but thought I'd spare you that. Enjoy and share with others my friends!

Posted by Doug McIntosh at March 18, 2019 No comments:
Email ThisBlogThis!Share to TwitterShare to FacebookShare to Pinterest
Labels: 2019, New Releases, the river of streams 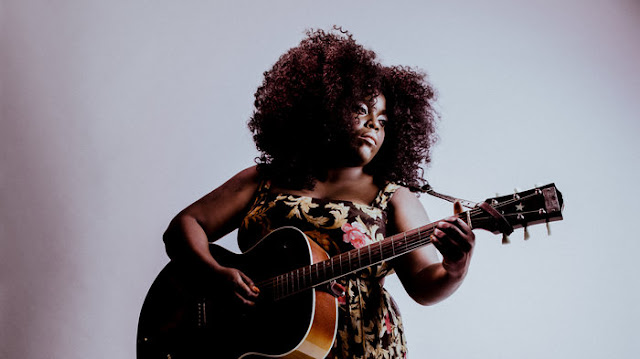 Yola Carter is a 35 year old British singer-songwriter who's just around the corner from being the next Americana sensation. Thanks to her performance at AmericanaFest 2016 that eventually led to her getting her hooked up with Dan Auerbach of The Black Keys and solo act sensation himself (check out his 2017 Waiting on a Song album). Auerbach has produced Yola's new album, Walk Through Fire, just released in February. 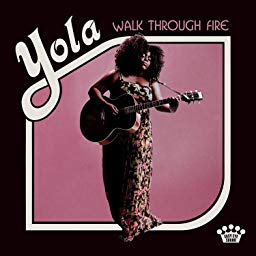 For this week's blog, I was working on featuring new music releases from January - March of this year, and had to put that on the digital shelf once I started listening to Walk Through Fire. Like so many people who hear her sing for the first time, I was simply knocked out. Auerbach was no exception, who instantly wanted to collaborate with her at his Easy Eye Sound studio and label in Nashville.

The result is a stunning album. Auerbach's influence as Producer who brought in a wealth of Nashville talent to support this project brings a very Waiting on a Song vibe without diminishing Yola's towering voice range across the album.

It is so rare for me to like every song on an album these days that it takes me back to my first listen to Carol King's Tapestry album in 1971. I'm not comparing the two, but Walk Through Fire is so well crafted as it goes to the deep well of American music and pre-digital recording.

Some would call this album 'Country Soul' but let's just embrace the entire palette of American music that has influenced this young woman as an example of why the Americana genre is thriving today, despite no mainstream radio time.

For the playlist this week, I have included all 12 songs from Walk Through Fire, and several songs from her 2016 EP, Orphan Offering, and then some tracks recorded at live shows or radio streaming events. Maybe this is your first listen of Yola Carter, it won't be you last! Enjoy my friends. It's February, 1969 and Cream is saying Goodbye in their last contractual record obligation with Polydor. As stated several times in my blogs over the years, the gem from that album is Badge written by Eric Clapton and George Harrison and included in the playlist this week.

Doing these blogs is always a blast to go back in time and listen to people like Mary Hopkin and hear her album Postcard, produced by Paul McCartney that includes several Donovan songs. It was also great to discover, Chicken Shack a British Blues band and Christine Perfect McVie's first band. 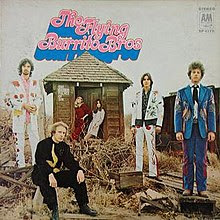 However, the pick of this grouping is an album that was not commercially successful at the time but later became a classic, The Gilded Palace of Sin by the Flying Burrito Brothers. I'm in the camp of people who see Gram Parsons as the "Godfather of Americana music" as a genre. Along with his other ex-Byrds bandmate Chris Hillman, they formed the perfect blending of country and rock that makes this album influential and legendary today.

From the driving Rock and Blues sounds of Cream, Ten Years After, Jefferson Airplane, MC5 and Vanilla Fudge, the soul of The Temptations and The Delfonics, to Michael Nesmith's country sound in The Monkees and the groundbreaking Flying Burrito Brothers debut album, there's still the sweet harmonies of The Beach Boys in early 1969. As Mary Hopkin sang,