A Year Of #NewMusicMondays 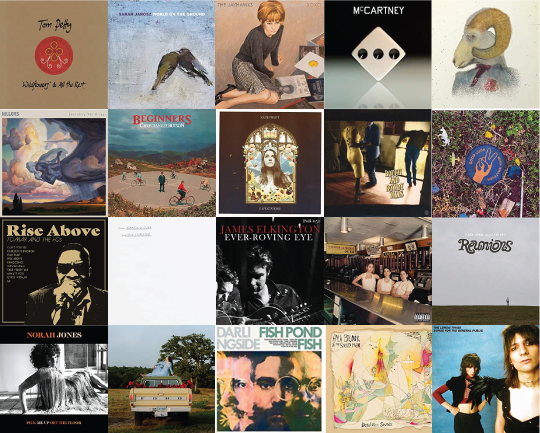 This year I began a monthly feature called #NewMusicMonday. In this edition, I've handpicked all the new music I was able to listen to this year and eventually determine my 'favorites.' For December, I've included my favs for this month in the year-long grouping.
I begin this post with my 20 favorite albums of 2020 from which My Favorite Songs of 2020 playlist draws heavily from these albums. These albums are organized left to right from 1-20 but after the top 5, it's pretty loose as most regular readers here know I usually avoid 'The Best of' label. I just wanted to recognize all these great albums released this year that cover the main genres of my personal tastes in: Rock 'n' Roll, Americana, R&B, Pop, and even some (real) Country made it this year.
Note- The following 'album links' are Amazon music options for purchase.
Now my #1 album for 2020 needs a little explaining. Wildflowers was released in 1994 by Tom Petty although you can easily call it Tom Petty and the Heartbreakers because his band is all over the record. So long story short- Tom Petty, Mike Campbell and his producer, Rick Rubin spent two years making what was intended to be a double album of twenty five songs. Lenny Waronker, the President of Warner Bros. Records "suggested that it was too long." In the corporate world, CEO's don't suggest and it was made into a single album with 15 songs. Petty's family and bandmates arranged a 2020 re-release of the album that includes the deleted [10] songs, demos, and live tracks entitled Wildflowers & All The Rest. The super deluxe edition of the box set included a fifth disc of alternate versions of the Wildflowers tracks (Wikipedia).
So most of the 10 missing songs are found in this year's playlist as Tom Petty is one of my (and probably yours too) all-time favorite singer-songwriters. It's hard to believe these 10 songs sat on the shelf for a quarter-century as they make an album most people could only dream of making. But Tom always had plenty of songs, and so we get some old new Tom Petty this year!
#1 Wildflowers & All The Rest (Amazon options)
My #2 album is World on the Ground by Sarah Jarosz. I think I have most of her ten songs from the album scattered about on the playlist. Sarah has all the tools- composition, voice, guitar, banjo and mandolin player, and is one of the most compelling singer-songwriters in music today. Sarah Jarosz is the real deal and in my opinion had the #1 album this year overlooked by the siloed format music business and critique. I guess Taylor Swift can dip her toes into folk-pop with her 2020 release of Folklore this year complete with the album jacket cover of Taylor in the woods. Well, the suits are playing it on pop radio and if that translates into 'whatever it takes' to maybe get people like Sarah Jarosz some airplay...
My #3 album is XOXO by The Jayhawks. Again I believe I have most of their songs on the playlist as this band has steadily emerged to be my newest favorite band. The Jayhawks are hard to pigeonhole as either Alternative Country, Country Rock, Folk Rock, or Americana, and so it just doesn't matter. This group is heartland rock 'n' roll who run a very democratic ship as far as bands go, and hopefully that will keep them together for years to come. This band is also often overlooked due to the narrow-minded music genre format structure. C'mon suits, can't you even play one new rock 'n' roll song on the classic rock radio dial?
My #4 album is McCartney III by Paul McCartney. This album was just released last week and featured in my blog from last week as well. From my perspective, what's not to like as most of the songs makes the playlist as an encore here this week. The playlist includes new material from both Bob Dylan and Paul McCartney, the two greatest singer-songwriters of all-time. What a gift for their fans in 2020!
My #5 album is See Here, I Have Built You A Mansion by Josh Ritter. This EP of eight songs is simply outstanding and introduced me to the music of Josh Ritter, as now I'm a big fan and think you will enjoy this singer-songwriter.
I was talking to my friend Ron Zieman on the phone about the playlist I did a couple of weeks ago, 50 Years of Music • My Favorite Songs of 1970. We both just couldn't get over how many great songs came out on one album back in the day.  Here, what all my top 5 albums above have in common is just like the old days, these individual records are all packed with great songs and well worth your 2020 music dollar.
6. Imploding The Mirage, The Killers
7. Beginners, Christian Lee Hudson
8. Expectations, Katie Pruitt
9. Rough and Rowdy Ways, Bob Dylan
10. Good Luck With Whatever, Dawes
11.  Rise Above, Tomar & The FCs
12. Starting Over, Chris Stapleton
13. Ever-Roving Eye, James Elkington
14. Women in Music Pt. III, Hiam
15. Reunions, Jason Isbell and the 400 Unit
16. Pick Me Off The Floor, Nora Jones
17. Saint Cloud, Waxahatchee
18. Fish Pond Fish, Darlingside
19. Desolation Sounds, Ayla Brook & The Soundmen
20. Songs For The General Public, The Lemon Twigs 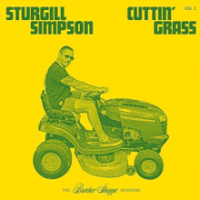 My Favorite Songs of 2020 playlist this week stands at 183 songs strong that has been a labor of love putting together this past year. These songs helped pull me through a tough tough 2020 and are not in a rated order other than that the top 20 or so are loosely put at the top of the list. I will mention my #1 favorite song of 2020, I Don't Mind by Sturgill Simpson. This song just caught me off guard the first time I was going through Sturgill's Bluegrass versions of his songs on the album, Cuttin' Grass, Vol. 1: The Butcher Shoppe Sessions. I think it's one of the best Country songs I've ever heard, and wish more artists could right that Country-pop music tilt back towards a more Bluegrass tradition. To tag-along on that last sentence, I've also included a song on the Playlist by Chris Stapleton, called Nashville, TN that speaks directly to 'Music City.'
Anyway, I guess that's why we have now have the Americana genre to thank for filling the 'roots' void as a new generation of artists will take us through the next century with new songs not often heard on AM/FM radio formats or on TV. I miss the old variety TV shows in the 60's and 70's where an older Hollywood star in a tuxedo would introduce a new band of young long-hairs to lip-sync their current hit song with their electric guitars not plugged in to their amps.
I guess we can be thankful for the Internet to be our current source for listening to NEW Rock 'n' Roll and Americana music that I'm happy to share with you here on Monday Monday Music.
Stay well, mask-up, and Happy New Year my friends!
Posted by Doug McIntosh at December 28, 2020
Email ThisBlogThis!Share to TwitterShare to FacebookShare to Pinterest
Labels: #NewMusicMonday, 2020, My Favorite Songs of 2020