In 2019, I wrote a blog called,  Rock 'n' Roll: The Classic Generation 1940-1950. I started that blog by identifying three essential groups of musicians:

The Classic Generation includes all the musicians in: The Beatles, The Rolling Stones, The Who, Cream, Bob Dylan, Simon and Garfunkel, The Beach Boys, The Byrds, Buffalo Springfield, Stevie Wonder, Jimi Hendrix, James Taylor, Jackson Browne, and Tom Petty and The Heartbreakers, just to name a few...

I thought I should go back to 1940-1950 where this classic generation of rock 'n' rollers as World War II babies and children, absorbed the music of the day from their parent's radios and records.

I then started sifting through Wikipedia's (Year) In Music as my guide starting in 1945. When I got to 1950, I found my starting point-

January 3, 1950
Sam Phillips launches Sun Records at 706 Union Avenue in Memphis, Tennessee.
Sam Philips [brought in] performers such as B.B. King, Junior Parker, and Howlin' Wolf, who made their first recordings there. Phillips then sold the recordings to larger labels [like Chess Records].
Chess Records located in Chicago was also founded in 1950 by the Chess brothers Leonard and Phil. The brothers formed an early business association with Sam Phillips as both Chicago and Memphis became magnets for the Blue's and early rock 'n' roll.
In 1951, Sam Philips produced "Rocket 88" (originally stylized as Rocket "88") is a rhythm and blues song that was first recorded in Memphis, Tennessee, in March 1951. The recording was credited to "Jackie Brenston and his Delta Cats", who were actually Ike Turner and his Kings of Rhythm. The single reached number-one on the Billboard R&B chart [and as distributed by Chess Records].

Many music writers acknowledge Rocket 88's importance in the development of rock and roll music, with several considering it to be the first rock and roll record.
Also in 1951,  Cleveland disc jockey Alan Freed began broadcasting rhythm, blues, and country music for a multi-racial audience. As one source points out, there was some controversy in his selection of recordings: "Freed would play the original singles by the black artists instead of waiting for a white singer to cover them".

Freed, familiar with the music of earlier decades, used the phrase 'rock and roll' to describe the music he aired over station WJW (850 AM).

Several sources suggest that Freed discovered the term (a euphemism for sexual intercourse) on the record "Sixty Minute Man" by Billy Ward and his Dominoes. The lyrics include the line, "I rock 'em, roll 'em all night long". Freed did not acknowledge the suggestion about that source (or the original meaning of the expression) in interviews, and explained the term as follows: "Rock ’n roll is really swing with a modern name. It began on the levees and plantations, took in folk songs, and features blues and rhythm".
This past week, I found a great little documentary titled, Howlin' Wolf - The Howlin' Wolf Story - The Secret History Of Rock & Roll (2003) on Amazon Prime. This 90 minute film gives insight into the beginnings of rock 'n' roll as older black Blues artists influenced many white kids in England hungry to experience American music and culture in the post-war 1950's. 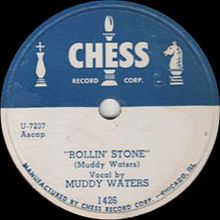 As a child of the 1960's, I was totally unaware of who Howlin' Wolf was or any other Blues musician. Without the backstory of bands like The Rolling Stones starting out as a Blues cover band in London; I would only later learn in the 1970's about these Blues players and their great contribution to the birth of rock 'n' roll and great influence on bands like The Rolling Stones. The name, "Rolling Stones" actually comes from a Muddy Waters song, Rollin' Stone picked by Stone's guitarist Brian Jones in 1962.
In 1965, The Rolling Stones were invited to play on the popular ABC music variety show, Shindig!. They said they would do the show only if Howlin' Wolf would perform. On one hand, that's brave of the Stones to do that, on the other hand, it's sad that it took a bunch of young white upstarts from England having the privilege and power to coerce an America TV network to feature a black musical legend and national treasure, born right here the United States.
Note- Billy Preston is the piano player for this performance on Shindig.
I rather enjoyed the interrupted intro of the Shindig host by Brian Jones who basically calls out his BS and tells him, "I think it about time you shut up and we have Howlin' Wolf on stage."
Another side note- You may have noticed my recent and complete interest in everything Rolling Stones of late. Well the debauchery continues.
This week, I recommend two Rolling Stones documentaries. First up is, Rolling Stone: The Life and Death of Brian Jones on Amazon Prime. And, if you are a budding 'True-crime podcast' detective, Brian Jones' death would make for a great future podcast series... just saying.
Second is Keith Richards: Under The Influence, a 2015 Netflix one hour and 22 minute film that serves as a video companion to Keith's 2010 autobiography, Life.
I think Under the Influence is a great title and I've ripped it off to use here for a series of blogs to showcase songs that influenced the development of rock 'n' roll. I think this will serve as a good lead in to My Favorite Songs series that will have a starting date around 1963. 1963 in Music is the first year in Wikipedia where new albums released for that year start to be categorized on a monthly basis. Let that big bang begin!
Now on to the playlist. Enjoy my friends.
Songs Featured in this 'Under the Influence' Playlist
References - All Wikipedia
Posted by Doug McIntosh at September 13, 2021
Email ThisBlogThis!Share to TwitterShare to FacebookShare to Pinterest
Labels: Brian Jones, Keith Richards, My Favorite Songs, Under the Influence