Our Democracy and Takin' It To The Streets


For the older, the Women's March on Washington also got me playing the the Doobie Brothers 1976 hit, Takin' It To The Streets in my head. I also remember Michael McDonald, James Taylor and a host of 70's hit makers singing it here at the 1979 protest concert for No Nukes (MUSE). Below, I'll leave you with the Doobie Brothers doing the song themselves back in the day when Michael had black hair. I've always loved this song and I'm happy to share it with anyone today mad as hell about the daily Trump shit show and needing a little Monday pick up to say a little, "hooray for our side". Signs show us there's going to be a lot of marching in the streets in the days and months ahead, so we better all just put on our running shoes and say, "Game On" for hopefully the short run of one Donald J. "malignant narcissist" Trump. 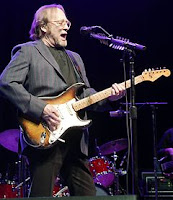 Posted by Doug McIntosh at January 23, 2017 No comments:
Email ThisBlogThis!Share to TwitterShare to FacebookShare to Pinterest
Labels: Buffalo Springfield, For What It's Worth, Game On, Stephen Stills, The Rides

Have an IPA with your IPA

When one (me) thinks of IPA, it is India Pale Ale. San Diego County is a national leader in the micro brew industry and I'm proud of our West Coast IPA's. So, the other day, while drinking a couple of IPA's, I came up with this blog title as MK and I were playing with our new Christmas present to ourselves. This would be our Intelligent Personal Assistant (IPA), otherwise known as the Amazon Echo with the personal aka, "Alexa." 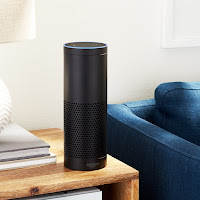 The other night we had our friend, Mark Hunter over for dinner and after a few IPA's (the beer kind), we showed him our current favorite game of, "Alexa, play Seinfeld Trivia." We also jumped into asking Alexa about music. Mark is currently learning the 1965 song (with his band The Waits), You Were On My Mind, by the We Five. So, Mark asked, "Alexa, play You Were On My Mind by We Five." The song comes on and smiles all around.

So I realize as I'm writing this it's probably going to sound like a free advertisement for Amazon; something they really don't need as the Amazon Echo did quite well and in fact sold out during the holiday season.  Anyway, we are having a blast with this IPA as the market continues to grow with these products and is probably the little canary before we get an IPA robot someday off in the future. I can't wait to get "James the Butler" for Christmas in 2020 something.

For music, we also dressed up Alexa a bit by purchasing Amazon Music Unlimited for $79.00 a year if you are an Amazon Prime member. At first, I balked at the price, but after purchasing, it was a smart move for us because now we have unlimited streaming music on several devices: our computers, phones with Bluetooth in the car and of course, Alexa. For the car, I downloaded the Amazon Music Unlimited app for my smartphone and can choose between my extensive Offline music collection on my phone and not eat into my data minutes, or stream any Online Playlist I want to. For the Echo (and I recommend the sound of the Echo vs the smaller Amazon Dot), Alexa is strategically placed on a table that is located by the bottom of our stairs. This is almost the center of our up and downstairs house, where Alexa is in earshot from almost any location in the house. While writing this on my computer upstairs, I asked "Alexa, play We Five," and she responded by giving me a mix of their music, until you simply say, "Alexa, pause or Alexa stop."

Anyway, I hope to tap into a lot of old and new music this year drinking IPA's and using the Echo which may lead to some random Monday Monday Music blog. I leave you with my We Five Playlist.

Timothy B. Schmit and Jack Tempchin at the Coach House, 1/7/17 and Glenn smiling down 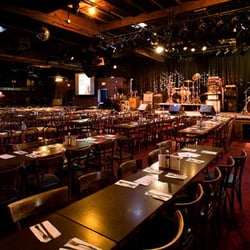 MK got us tickets for Timothy B. Schmit and Jack Tempchin last Saturday night at the Coach House in San Juan Capistrano, CA. We had never been there before as this venue opens at 6pm for people with reserved seats and general admission walk-in's. The Coach House serves dinner before the show as people come in to sit down at long row tables that are 24" deep. When you sit down, you realize that the two people (typically strangers) sitting across from you are going to be sharing a small space in a very up close meal with probable conversation. You wonder who are these people sitting across from you, but the close proximity forces you to quickly engage in conversation as you literally have to be a cooperative group just to lay the food and drinks out on your little table together. 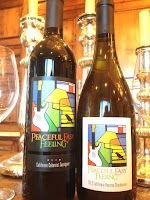 MK and I had the pleasure to sit across and meet Michael and Cindy Langdon who happen to be neighbors of Jack Tempchin in Encinitas. Well that quickly got the conversation going as it was going to be awhile before the show started at 8pm. The food and service at the Couch House were fabulous by the way, in what I was thinking was straight out of a mid-west community tradition of combining food, conversation and music. Anyway back to our evening pairing, Michael Langdon is the wine buyer for Whole Foods in Encinitas and told us how he met Jack, became friends and helped him develop a brand of wine from his most famous song, Peaceful Easy Feeling the monster hit for the Eagles and sung by Jack's old friend and writing collaborator, Glenn Frey. Here is a LA Times article, Peace in a Bottle that tells the whole story as Michael told us on Saturday night. Here are the links to South Coast Winery in Temecula, CA and their Peaceful Easy Feeling Cabernet Sauvignon and Peaceful Easy Feeling Chardonnay.

Here's Jack singing at Whole Foods and Michael Langdon appears left of the screen
as I'm assuming he organized this event at the Encinitas store.

Now, on with the show at the Coach House. Jack was the opening act of the evening and began his solo set with the same guitar pictured above. He told great stories of writing songs with Glenn Frey and then proceeded to sing them with single acoustic clarity. He also sang a song from a tribute album that is coming out soon of songs Glenn and Jack have written together, including several unrecorded songs. Jack deeply misses his friend. The fans at the Couch House were touched, I certainly was touched as we approach Glenn's passing almost one year ago on January 18th. Jack Tempchin simply belongs to the city (San Diego) and he belongs to our night. Man, I was enjoying this evening and Timothy hadn't even come out yet. 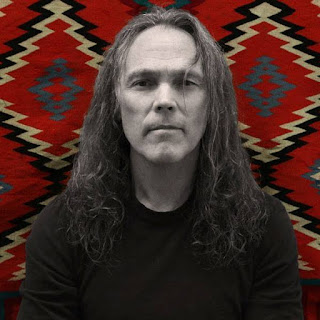 And then he did, with his wonderful band. The Couch House was packed full of hard core Eagles' fans who know this man's history back to Poco. We were altogether on Saturday night, the fans, the people of Southern California who grew up on country rock. We had come to see a native son from Sacramento who helped define an era. But, Timothy B. Schmit is not about the past, he embraces his roots as he crafts new music. His new album, Leap of Faith was selling well in the lobby (MK was all over it, t-shirt too). By the way, does this man look 69 years old to you? Timothy's voice was simply amazing as always as the fantastic sound of the Coach House piped out pure harmonies from the band. Pretty good for someone who battled throat and neck cancer in 2012 and now has a clean bill of health. Let's keep thinking good thoughts for Timothy! As he was the concern of the Eagles and their fans just a few years ago, nobody envisioned Glenn Frey's death. During the set, Timothy sang and played, Tequila Sunrise solo acoustic guitar. The woman next to MK was openly sobbing, my eyes and many others welled up too. I thought of Glenn smiling down on his buddies Jack and Timmy still making fresh new music. As I listen to Leap of Faith as I write this, I feel blessed for the communal experience of Saturday night with the music and the fans at the musical church known as the Couch House in San Juan Capistrano.

Timothy returns to the Couch House January 11th (Sold out) and January 24th at the Belly Up Tavern (Sold out). Here is his current tour schedule.