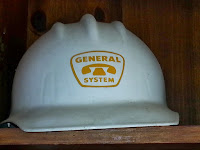 This past week I watched the documentary, Glen Campbell: I'll Be Me and it got me to thinking about my father who past away in 2014. My dad worked for the General Telephone Company and started his career as a Lineman in Santa Maria, California. In 1968, Glen Campbell released the Jimmy Webb song, Wichita Lineman and it has always made me think of my dad, kind of like his theme song. I've included the song in My 100 Songs YouTube playlist below as it continues to grow. So this one's for you dad.

This is a quick blog this week and my last on a weekly basis for a while. I need to focus on building my educational consulting business as things are starting to take off for me. I hope to continue to post Monday Monday Music blogs on a sporadic basis and hope you enjoyed the ones I have written so far. I'll keep adding songs to my list here and should be a pretty good mix of music to enjoy. Let's all just keep listening to all kinds of music as much as possible. Our minds are meant to be fed rhythm as it nourishes the soul and keeps us young. Take care my friends.

Don Henley and his Cass County Tour arrived at the Los Angeles Forum last Friday night. I told Mary Kit before we got the tickets, "I don't want you to be disappointed with this show because we might be listening to cowboy music all night." MK is more of an All She Wants To Do Is Dance  kind of gal, but we are both huge Eagles and Don Henley solo career fans and jumped at the chance to see him. Without getting too involved here, let's just say Don has that special gift as a songwriter to make you feel that his words are your life. MK and I are obviously not unique in this feeling as this has been a key to his success. As for us, no other musician has tapped into that personal well of emotion more than Don Henley.
And speaking of relationships, Henley had the magic to add Shawn Colvin as his opening act on this tour. She is one of my favorite artists and I will reserve a future blog to just focus on her music. I recommend you go buy her new album, Uncovered. It is her second cover from another wonderful group of songwriters. Shawn setup this concert evening perfectly when she said that she basically writes, "breakup songs" and said, she loves the line by Trisha Yearwood that "sad songs make me so happy."

With that, we tap into the musical mind of Don Henley and his genius to entertain a full house at the Fabulous Forum with a crafted mix of his solo career, theme-selected covers and new songs. The new album pays country homage to his youth in Linden, Texas listening to music on the radio at home and in the car with his dad. The concert starts with about 30 old radios of various shapes and sizes hung from the ceiling with a spot light. The spot-lighted radios are synchronized moving quickly from one radio to the next with audio of an old radio dial changing stations, playing classic radio sound bites from the 40's to the early 70's.

Cass County has debuted at Number 1 on the Country charts and as Henley described during the concert, this is nothing short of "a miracle." But, as a (not in a box) rock legend, Mr. Henley knows a thing or two about making hits. He brings in a line up of home run hitters including, Mick Jagger, Miranda Lambert, Merle Haggard, Vince Gill, Martina McBride, Alison Krauss, Trisha Yearwood, Dolly Parton, Lucinda Williams and Stevie Nicks. If you're like me, you'd buy the album on the harmony vocals alone!

Here is the Set List of the Cass County Tour. Explore my Radio, Don Henley and the Cass County Tour YouTube Playlist below with most of the 2015 tour set list order. I was able to video corral the Cass County songs from the album (except the bonus track of the Jackson Browne song, Here Comes Those Tears Again. I will add that to this playlist when it comes to YouTube). I've also ended the playlist with a couple of recent interviews that I think you will enjoy. 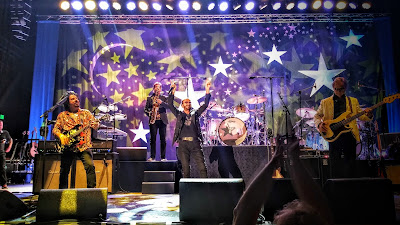 Last Friday, Mary Kit and I along with our good friends Ken and Vicki Forman and Paul and Jane Hobbs saw Ringo Starr & His All-Starr Band at the Vina Robles Amphitheater in Paso Robles. MK scored the best seats she and I have ever had at a concert, second row, middle of the stage. I couldn't believe this gift when Ringo and the band came out. I was standing dead center 10 yards from a Beatle looking right at me, singing Matchbox. This was bucketlist fun and quickly realized it was going to be the best music party I'd ever experienced, surrounded by a bunch of like-minded boomers rocking out! All the pictures here were taken from my cell phone and I have to say, Ringo was so gracious and even leaned into many pictures being taken by people close to the stage. This was his party and he was going to make everyone feel the love.

If you have time, look at the first link above as it lists all the All-Starr Band lineups Ringo has put together since the first group of super musicians in 1989.  The current list of band members have been together since 2012 and include: 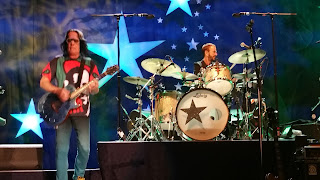 If you are unfamiliar with the band's format, Ringo sings about a third of the time throughout the show and lets his other rock star mates play their hits. Here is the Setlist with live YouTube video clips of the songs from the band's various tour shows that you will enjoy watching.

I knew Todd Rundgren was in the band and was very excited to see him for the first time live. Todd is one of the great rock 'n' rock characters and was a fun showman playing his hits from the 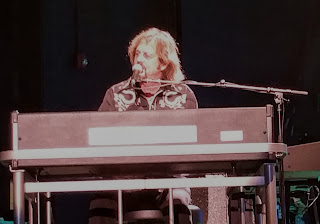 70's and running all over the stage much of the night.

I was totally surprised that we were also going to a mini Santana concert with Gregg Rolie who was the lead singer and organ player in Santana. Rolie's voice and organ playing was fantastic. 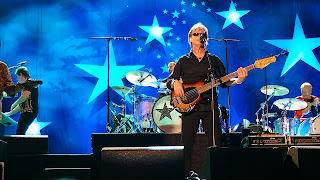 I was equally taken by Richard Page who was the lead vocalist for Mr. Mister. Page is an excellent singer along with his strong bass playing. I loved his bass on Todd's song,  Bang on the Drum All Day. I have to admit I was never a Toto fan but enjoyed Steve Lukather's lead guitar on all the band's songs including his Toto songs that greatly amped up the whole party atmosphere. And yes, I was actually dancing and singing along to Toto songs, it was that fun with everyone having a blast.

Ringo really knows what he is doing here. All of these musicians are great pros and you already know he has a knack for surrounding himself with talent. Ringo is forever a Beatle, keeping time and being timeless. At 75 he is in great shape, relaxed, happy and loved by everyone. Mr. Peace and Love is a class act and knows how to send everybody home with a huge smile on their face.
We love you Ringo! 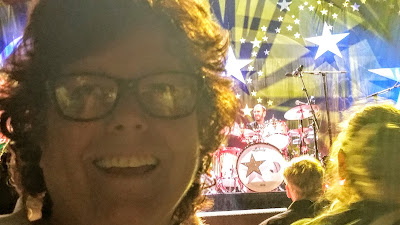 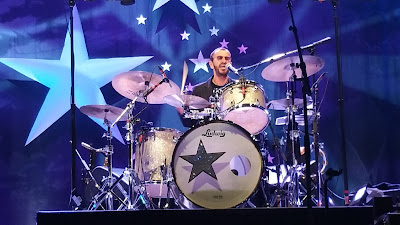