This week I play the wannabe influencer, again trying to promote exercise related products that have worked for me even without an endorsement deal, much less any business acumen.
Really I'm just sharing several solutions where I've gone through the trial and error process of buying and using several similar items in a product category before finding a winner. 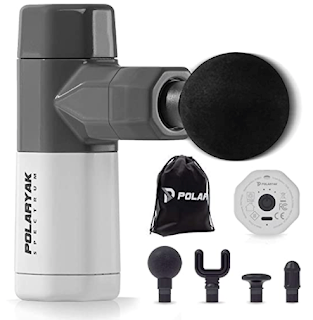 First up, after buying a couple larger 'Uzi' style cordless massage guns for my chronically tight calves and thighs, I found this lightweight gem (or gym) that also conveniently fits in my day pack or suitcase. It charges easily with a USB port. I use the ball attachment for deep tissue pressure and the smaller size fits so much better in the palm of my hand. What's the line from John Mellencamp, "hurts so good."
Muscle Massage Gun - Mini Hand Held Massager, Portable Massage Tool, Deep Tissue Percussion Cordless Massager – with 4 Heads for Different Muscle Groups POLARYAK - Spectrum $38.99 (Plus $5 off coupon) on Amazon.
Next up is my ongoing search for the ultimate joint pain relief supplement. In the past, I have posted a product that I described as the "kitchen sink" of joint support containing the four main ingredients found in the joint ache market today: Glucosamine, Chondroitin, MSM, and hyaluronic acid. 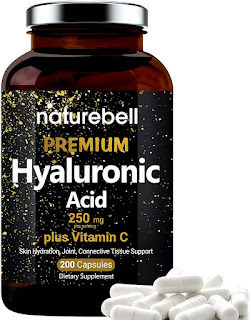 My brother-in-law Roger turned me on to hyaluronic acid several years ago and I started to incorporate it combined with Glucosamine, Chondroitin, and MSM almost like a multiple vitamin. About six months ago, I decided to just go with hyaluronic acid alone but take more of a maximum dose. For me, I think it's been more effective than the kitchen sink approach as I feel it has eliminated most joint aches and has minimized my knee pain. By no means is hyaluronic acid a miracle cure but I feel it does a good job in hydrating one's skin and joints. Here's an article that looks at 11 benefits of hyaluronic acid for the face and body
Here's my current recommendation -
NatureBell Hyaluronic Acid Supplements, 250mg Hyaluronic Acid with 25mg Vitamin C Per Serving, 200 Capsules, Supports Skin Hydration, Joints Lubrication, Antioxidant and Immune System, Non-GMO (Amazon). I take the recommended 2 capsules a day (500 mg). 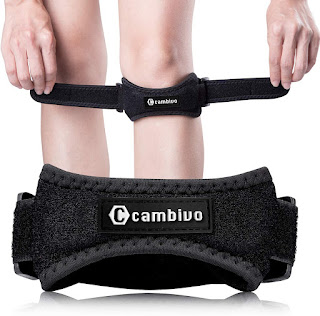 If you're a walker, jogger, cyclist, baller or dancer you've probably experienced knee pain at some point. In the past couple of years, I have developed knee pain (w/no swelling) in my lower right knee below the patella.
I then found this patella knee strap on Amazon and wear it for running and if I'm doing any work around the house that involves bending or working on my knees.
CAMBIVO Patella Knee Strap, 2 Pack Wide Knee Brace, Patellar Tendon Support Band for Arthritis, ACL, Running, Basketball, Meniscus Tear, Sports, Hiking, Soccer, Squats ($14.69)
This strap in conjunction with the hyaluronic acid (and icing) have significantly reduced my knee pain to more of an ache, again no miracles here but a big improvement to keep me moving forward and in the long run of life.
Best Songs I heard this past month while mostly on the move with my phone.
Follow Monday Monday Music™

When your favorite band covers a classic tune, their version is their interpretation — their translation — of the music. Is it better than the original? That's up for interpretation. Vocabulary.co
In putting together this Volume I of Beatles covers, I had three movies in mind that feature Beatles covers that would help shape the playlist.
I included the song, Golden Slumbers/Carry That Weight from the 2016 animated film, Sing performed by Jennifer Hudson.
I also included the song, Across the Universe from the 1998 film, Pleasantville performed by Fiona Apple.
I then filled the rest of the playlist with mostly live Beatles covers some of which I had never heard before. I decided to only feature one cover song per volume playlist. For example, I found several excellent versions of Blackbird and Here Comes The Sun and they will likely appear in later volumes as the treasure of Beatles covers is deep and wide.
I also included a cover of George's Beware of Darkness which is from his solo album All Things Must Pass, and in the spirit of Chris Carter's (KLOS-FM) Breakfast with The Beatles I will include cover songs from the lads solo albums here and in future volumes as well. 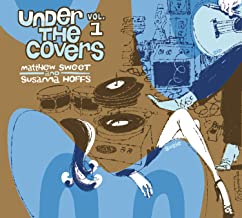 I found a great clip with The Bangles on Breakfast with the Beatles. In that discovery, I found three album volumes of covers by Matthew Sweet and Susanna Hoffs recording under the faux love couple name, 'Sid & Susie,' called Under The Covers. And on that note, I'll lead with Sid & Susie and their Beatles cover of And Your Bird Can Sing.
One last thing. In putting the playlist together this week I've been playing Beatle tunes in my head all week. Usually, I get one song I've picked for the playlist and that will be stuck in my head for several days. Here, I'm playing a different song or two or three a day in my head in the cover interpretation arrangements. The power of Beatle songs with all their composition just jumps right in and stimulates your brain in such a wonderful way. I don't need a reminder to know how special The Beatles are to me, but this past week brought back a wave of thought and emotion to punctuate how special John, Paul, George, Ringo, and George Martin are to the world.
Featured Covered Songs and Artists Include:
References
Posted by Doug McIntosh at October 04, 2021 2 comments:
Email ThisBlogThis!Share to TwitterShare to FacebookShare to Pinterest
Labels: Covers, TheBeatles
Newer Posts Older Posts Home
Subscribe to: Posts (Atom)