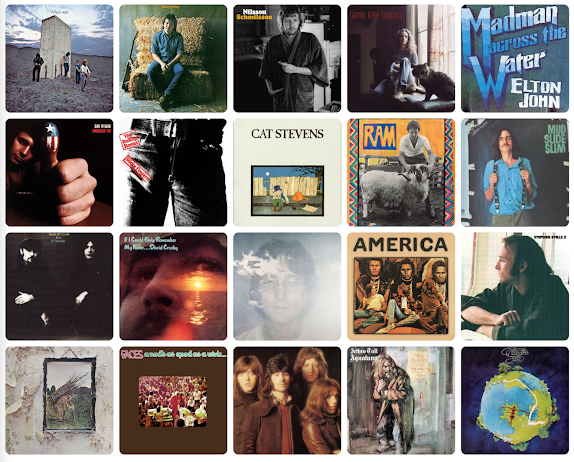 Ah, summer is over
But the music keeps playing
And won't let the cold get me down

Pictures are forming inside my brain
Soon with the colours they'll rain together and grow
Then don't you know, don't you know there'll be music

Ah, it's not always easy
But the music keeps playing
And won't let the world get me down
–Carole King, Music 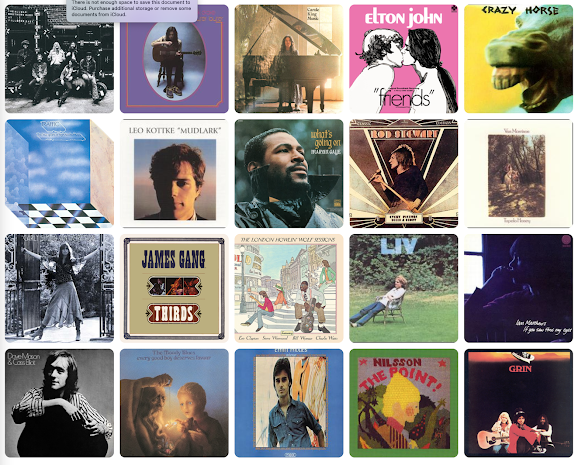 This blog is a twelve month culmination of my ongoing series Fifty Years of Music where I feature a month and year fifty years ago.

In 1971, I was a sixteen year old sophomore and then in the fall started my junior year of high school. Here's a look back at the historical, film, and musical events of that year. (The following selected dates are from Wikipedia in italics: 1971, 1971 in Film,  and 1971 in Music. I have also added my own little commentary in regular text on some of the date entries.)

1971 is often called by music critics as the "Best" year of rock 'n' roll. I can't deny that this week's playlist of 200 could have easily taken on many more songs but for the fact that YouTube stops embedded playlists at 200.

I know I lose marketing hits to the blog by using the term, "Favorites" but so be it, people want to be told what are the "Best" songs to listen to.

Here's my Favorite 'Top 40' albums of 2021. I did rate them, blending my 16 year-old self with my 66 year-old self. The majority of the 200 great songs in the playlist this week come from these 40 albums. I did not rate the songs themselves but simply created my standard handmade random-feel mix.

This mix got me thinking about the first cassette mix tapes I started making in the 70's and playing in my car. In 1979, Sony created the Walkman® and revolutionized taking your personal music with you on a walk or run. When the Apple iPod came out in 2001, it continued making personal music portable and lighter, but also freed songs from being in a linear order with the digital 'Shuffle' feature. For me, Shuffle has been a concept I have fully embraced for twenty years now for listing to playlists, or when listening to all your songs on a device or service. My YouTube playlists are almost always designed to create a handmade random-feel of the Shuffle button I use on my smartphone music app.

But putting all order aside, this is an endearing if not enduring group of albums and songs from just one year in rock 'n' roll. Long live 1971!

Enjoy my Friends and Happy Festivus... for the rest of us!

Posted by Doug McIntosh at December 20, 2021
Email ThisBlogThis!Share to TwitterShare to FacebookShare to Pinterest
Labels: My Favorite Songs