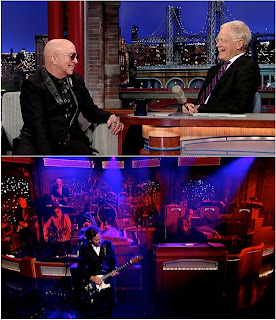 This past week David Letterman finished a 33 year run with 6,028 shows on late-night television at NBC and CBS. This is truly a phenomenal feat of talent and stamina.  Letterman did this all the while with his musical director Paul Shaffer at his side. The trust and bond between these two men have provided the public with a treasure trove of memorable moments through the daily preparation and collaboration of Letterman and Shaffer. I don't think David Letterman would have done 33 years unless he had Paul Shaffer and the band to help deliver the show night in and night out. I'm sure that like Dave, Paul was not feeling it every night, but you would never know. Shaffer's passion and professionalism always shined through and made the Late Show with David Letterman the place to showcase almost every genre of music. From an eclectic selection of musical guests, including famous musicians who just wanted to play the night in Paul's band, we all got treated to music not always heard on mainstream television. America doesn't often play Americana music on ABC, CBS, NBC and Fox, but Dave did. Letterman's move to CBS ultimately didn't win the TV ratings war with Leno's and Fallon's The Tonight Show, but he won the hearts of a nation with his unique combination of angst and love. And, Dave loved the music.

With a show of this magnitude and duration, there is no way to capture the thousands of musical guests who created magic on Letterman's shows. This magic was especially preserved in the musical performances in the Ed Sullivan Theater once HD television enhanced the sight and sound of live music. Listen to the more recent recordings and you'll hear the theater's acoustics in the performances. We now have thousands of those moments to enjoy on the Internet and I had quite a task this week to screen a 100 or so videos. I selected 33 choice cuts for your pleasure and hope you enjoy my YouTube Playlist this week.

Dave and Paul, thanks for the memories and 33 years of wonderful music.

I have to end with David Letterman's first guest in 1982 and his last non-musical guest, Bill Murray. Bill takes to the streets and leads a classic Lennonesque chant with the crowd outside the studio,
"All we are saying, is more Worldwide Pants."

Posted by Doug McIntosh at 8:44 AM