The difference of 10 years and heroes 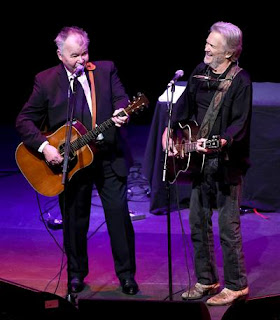 I'm currently in downtown Seattle with my oldest and dear friend Bill DeVoe in his law office thinking of inspiration for a quick Monday Monday Music blog. I've got on my John Prine concert t-shirt from last October, so maybe that's my sign and should just go with it.

John Prine played in San Diego with his hero, Kris Kristofferson at the Civic Theater and it was great to see the two play together. Prine was so happy that his mentor and friend were together on the same stage as he shared his admiration towards Kristofferson and the influence he's had in his life.

I got to thinking of heroes and the difference of age between the hero and the one looking up to them. With Kristofferson (80) and Prine (69) it is just a bit more than 10 years. This got me thinking about all my musical heroes from the 1960's and 70's. Bill and I were born in 1955 at the tail end of the baby boom that started after World War II in 1945. It's amazing to see how many rock 'n' roll greats were born in the 1940's and became stars to us all born in the 1950's. If you look at this current picture of Prine and Kristofferson, and didn't know them, you would think that they were closer in age.  I think about being 15 and the long list of rock heroes that were in their early, mid and late twenties and the difference of age and stature was just so enormous at the time. I really don't have much of point here, other than the importance of having mentors and heroes with that 10+ year gap to look up to, learn from and dream of your possibilities for the future.
I'll leave you with this one from October, 31, 2015.