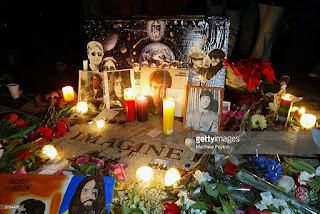 Come together right now over me
John Lennon 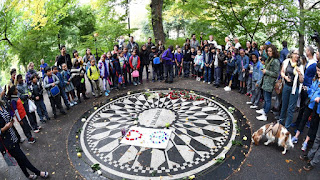 December is a time to reflect and remember. I remember December 8, 1980, the day John Lennon was shot and killed in New York City. It was my first year of teaching in a very intense special education class for children with severe multiple disabilities. I believe one of my classroom assistant's had quit and I then had a series of long-term substitutes for awhile. One fellow, (who for the life of me I can't remember his name) was a struggling musician who had various part-time jobs. We had been working together a couple of weeks and often talked about music and bands we loved. As I recall, this really wonderful guy came to work in my class the morning of December 9th and hadn't heard about the shooting. Now, I can't remember his name, but I'll never forget the look on his face and breakdown when I told him that John Lennon had been shot in front of his apartment building, The Dakota and died. In the days following, many news outlets and public mourning activities in Central Park would play, Come Together as John couldn't have possibly imagined this scene and the context of this song being used to actually bring people together over his tragic death. Like millions, I took John's death hard. I was 25 and not too many of my own loved ones had yet died in my first quarter century.

Today, I still take some musicians passing with a bit of a jolt. These wonderful artists have been in our hearts and minds for so many years, they touched us and we shall never forget the impact they had on us. I know older people in especially smaller towns will scan the obituaries in their daily local paper to see if an old friend or acquaintance has died. I guess for music I get a similar experience when my Rolling Stone phone app pops up to tell me this kind of news.

2016 has been an exceptionally hard as many giants of music have passed this year. I went to this web site, We Heart Music and got the monthly list to prepare for this blog. I like their across the board approach as they acknowledge many lesser know artists in the music business.

As I get older myself, I'm sure this might be an annual blog on my part. At the Grammy's and Oscar's I now always get a bit teary-eyed when they do their annual remembrance segment. The beautiful thing about people in the arts is that we have their performances preserved in various media formats that we can enjoy again and again.

Here, I've embedded a memorable track under each artist.

Happy eggnog and wishing you a healthy year and as Glenn would say, "Take it Easy."

July
7/24 - Marni Nixon, 86 (Best known for dubbing the singing voices of the leading actresses in films, including The King and I, West Side Story, and My Fair Lady.