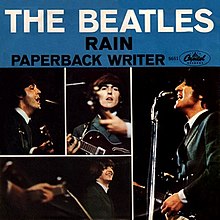 About three weeks ago, I noticed that The Beatles have released several new video recordings on their TheBeatlesVevo channel on YouTube, check it out.

I'm currently working on a new blog that needs a bit more research so thought I would post a little topical song for the folks in Southern California desperate for some rain and in the forecast.

I know with the "bomb cyclone" in the east that people there would welcome "just rain" so here's thinking to some warmer weather ahead for them.

With that in mind, I remembered The Beatles' Rain just being released on YouTube as I noted above.

So here's to some rain, at least in So Cal, but not too much because of the fires and then mudslides. Happy Monday.

Posted by Doug McIntosh at January 08, 2018
Email ThisBlogThis!Share to TwitterShare to FacebookShare to Pinterest
Labels: rain, The Beatles