Hello darkness, my old friend
I’ve come to talk with you again
Because a vision softly creeping
Left its seeds while I was sleeping
And the vision that was planted in my brain
Still remains
Within the sound of silence
from The Sound of Silence by Paul Simon

In my 12th grade English class the teacher Miss Dunn, did a poetry unit on Simon and Garfunkel. She unpacked Paul Simon's lyrics and we explored songs such as, The Sound of Silence and The Boxer as deeply as passages of Dickinson or Thoreau.

Paul Simon is simply one of American music's greatest treasures. By the late sixties, he had reached Bob Dylan's poet stature as the songwriter of Simon and Garfunkel.  But he just never stopped his momentum and continued to evolve as the quintessential instrument to channel American and world rhythms into music as a solo artist.

Last Friday, I got to see Paul Simon for the first time at Key Arena in Seattle. His Homeward Bound - The Farewell Tour is billed as the final tour of his career and at 76 I'm just going to have to take him at his word. His setlist included 25 songs with three well planned but heartfelt encores.

Joining me was my lovely wife Mary Kit, as well as my dear old friend Bill DeVoe and his good friend Neil Wiesblott from Vashon Island. Our foursome was part of the largely "Boomer" crowd that grew up listening to Paul Simon, and in turn, our children listened to Simon growing up with us.

In preparing for the blog this past week, I typically start with the playlist and wanted to feature many of the songs from his recent performances. I got really excited listening to Paul's 70+ year old voice in concert as the man is well preserved physically, vocally and musically.

On Saturday after the concert, I had a chance to have lunch with Bill and he talked about how Simon just continued to evolve as an artist through the decades, not afraid to explore and expose his audience to literally the rhythms and beats from all kinds of cultural influences. Our discussion turned to how historically white musicians have "taken" music from musicians of color and not given them credit for not only their influence but the dollars they have reaped from that influence.

You can go back to the 1920's and discover jazz performers such as Paul Whiteman (literally his last name), who was known as the "King of Jazz" to the larger white audience without publicly  acknowledging the black artists who in fact created the art form of jazz itself.

This too could also be applied to Elvis Presley in the 1950's as the "King of Rock 'n' Roll" to the larger white audience, and if I'm not mistaken, never overtly talked in the media about how black music influenced his music. I will say many black musicians like Little Richard have publicly said how Elvis' popularity actually boosted their careers, but not said by the man himself, in front of a microphone or television camera.

But in the 1960's and by the 1970's this pattern had begun to change. Groups like the Rolling Stones and musicians like Eric Clapton, openly talked about their black musician idols, and "put their money where their mouth is" by getting them big time booking gigs and appearances on TV.

Paul Simon took it a step further. He started putting people like the Jessy Dixon Singers in his albums and on his concert tours. He went to South Africa under Apartheid, hired all black musicians, recorded and toured with these musicians, and caught a bunch of crap for it. There are probably people who think Paul Simon has "taken" African music, but I would disagree. If you don't like the fact that Paul Simon is a musical genius whose world influences have created some of the most catchy rhythmic beat hooks of all-time, you probably just don't get rock 'n' roll. Rock 'n' Roll is for everybody but it's important to know where it comes from and to acknowledge the people who brought the beat, no matter who's playing it.

Paul Simon rocked Key Arena. He's got one of the most talented bands I've ever seen. I could only image the audition process to join this elite group of people who all seem to perform double duties of playing multiple instruments plus sing harmony or back up vocals as well. The percussion section is hypnotic and the horns are the pure joy of the soul. Paul was fully engaged, telling stories about the songs and his singing voice was fantastic! The crowd couldn't get enough as he moved from acoustic to full orchestral, big sound arrangements and back to acoustic guitars. It was not quite late in the evening and Paul Simon blew me away. I was not alone. 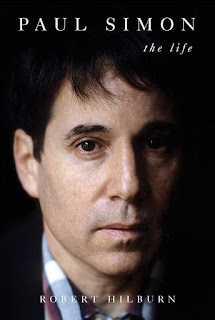 If you're wanting more, I would suggest Paul's new book by Robert Hilburn, Paul Simon the life. Here is a book review in the Seattle Times by Paul de Barrios. I haven't read the book yet, but I think it will be on my bedside table very soon.


And, a very positive review of the May 18th concert at Key Arena in the Seattle Times by Michael Rietmulder.

You know when an artist is so enduring to you that you sing the lyrics and play the music of a favorite song, in your head. For me Paul Simon has that extra quality (like Stevie Wonder) when the rhythm of the instruments just play over and over in your head, in a good way.

Right now as I'm writing this, I'm playing the acoustic guitar lead into Me and Julio Down by the Schoolyard, in my head, and that my friends is a gift on so many levels.

Posted by Doug McIntosh at 6:32 AM