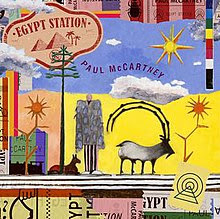 Paul McCartney's new album, Egypt Station is set to be released September 7, 2018 but Sir Paul has given us several bits of new media to hold us over through the summer.

First, I saw the Carpool Karaoke with Paul for The Late Late Show with James Corden in Liverpool. I think its fabulous and the reason for creating this post.

Then, Paul has just released two songs off the album, I Don't Know and Come On to Me.

I'm still kicking myself for not seeing him at Petco Park in San Diego in 2014. These opportunities are shrinking with the greats and let that be a lesson mates to go see the band you want to see when your gut tells you to go!