Woodstock was a music festival held August 15–18, 1969, which attracted an audience of more than 400,000. Billed as "an Aquarian Exposition: 3 Days of Peace & Music", it was held at Max Yasgur's 600-acre dairy farm in Bethel, New York, 43 miles (70 km) southwest of Woodstock. It was alternatively referred to as the Bethel Rock Festival or the Aquarian Music Festival. Thirty-two acts performed outdoors despite sporadic rain. It has become widely regarded as a pivotal moment in popular music history, as well as the definitive nexus for the larger counterculture generation. Wikipedia

My thoughts on Woodstock 50 years later are similar to the millions of people who wished they would have been there- it was one of the greatest "one-offs" in the history of mankind. Woodstock should have been a disaster, but in its totality was a wonderfully unique event in time.

The big 50th Anniversary concert promoted by original Woodstock co-founder, Michael Lang tried his best this round, but the big festival was recently cancelled, and in my thinking probably for the better. Like the disastrous, Woodstock '99, it just wasn't meant to be.

However, in the town of Bethel, New York, the original site at Max Yasgur's dairy farm something wonderful happened this past weekend. A Woodstock anniversary concert was held there and no national news organizations seemed to be reporting on it as of my Saturday 8/17 draft of this blog, other than the regional Poughkeepsie Journal. Considering our times, and with a much smaller crowd, nothing happened other than peace and music.

I'm just now learning and about the Bethel Woods Center for the Arts • Site of the 1969 Woodstock Festival. This past weekend, they quietly put on a great show! I guess it doesn't matter if I'm 14 or 64, I'm still a day late and dollar short finding about concerts after the fact. 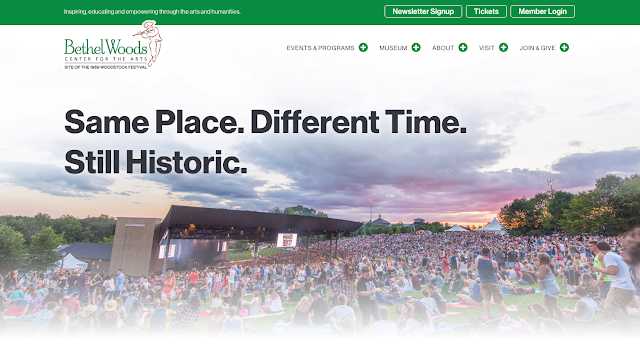 
Woodstock 2019: Generations soak in spirit at Bethel Woods together