Well, I guess I'm standin' in a hall of broken dreams
That's the way it sometimes goes
And every new love never turns out like it seems
I guess the feelin' comes and goes

Many rock fans may have never heard the name John David (JD) Souther, the singer-songwriter with a fantastic singing voice matched by his mastery of lyric and rhythm in crafting haunting love songs mostly made famous by other people including, the Eagles, Linda Ronstadt, and James Taylor. In relation to the Eagles and Ronstadt, Souther directly participated as a songwriter or co-songwriter of some of their biggest hits, not to mention being a close friend, confidant and essential collaborator for two of the greatest acts in rock 'n' roll history.

In 2013, Souther was inducted into the Songwriters Hall of Fame and called "a principal architect of the Southern California sound and a major influence on a generation of songwriters." Wikipedia

JD Souther was born in 1945 in Detroit, grew up in Amarillo, Texas and like so many of his contemporaries moved to Los Angeles in the 1960's.  During this time, Souther was Linda Ronstadt's boyfriend and lived with her, and was also roommates or close neighbors with Glenn Frey, Jackson Browne, and Don Henley in the Hollywood hills. In 1969, Frey and Souther formed the band Longbranch Pennywhistle and released one album with the same title as both were at the forefront in creating country rock as a genre in the 1970's.

In 1972, Souther released his first solo album, John David Souther and in 1974 formed the super country rock band, Souther-Hillman-Fury Band that made two albums and broke up in 1975 as the three continued to pursue their solo careers.

If you've followed the Eagles from the beginning with their first album in 1971, you've probably wondered or even wished like I did, why JD Souther was never a formal member of the band? With co-writing credits on Best of My Love, James Dean, New Kid in Town, Victim of Love, Heartache Tonight, and How Long, this guy should have been in the starting lineup. I've read that Randy Meisner the original bass player in the Eagles rejected the idea of Souther joining the group, but I think, like Jackson Browne that their solo careers were their primary focus. Also, I think Souther's life-long friendships with Henley and Frey were more important than being another chef in the Eagles kitchen.

I have a tendency to play- Should've Could've, but I personally think if JD Souther had been a full-time Eagle that band would have soared even higher, maybe even into the 80's? And, when Glen Frey died in 2016, I think JD should have become an Eagle and not Vince Gill. Don't get me wrong, Gill was a wonderful choice, but he is a country star and not part of the Eagles rich history like Souther. Who knows the private conversations that took place between Henley and Souther, but that's just me being a fan...

Now if you're a fan of Linda Ronstadt and who isn't, JD Souther is so much more than a former boyfriend and duet singer on some of her albums. In fact, Linda recorded ten songs by Souther, three of which are bonafide rock 'n' roll ballad classics and all-time favorites of mine- Faithless Love, Prisoner in Disguise, and Silver Blue. In this week's playlist I've included Linda's versions of these three songs with JD's stellar backup vocals on these classic tracks that never get old.

Last Thursday, I got to see JD Souther live at the Belly Up Tavern in Solana Beach. It was a great show and I spotted Jack Tempchin (Eagles songwriter, Peaceful Easy Feeling, Already Gone) coming from backstage to sit down for the show. Souther performed solo and moved between acoustic guitar and piano to play a great setlist for the mostly boomer faithful crowd who were respectfully quiet during the songs. JD is also a great storyteller and I appreciated his setup stories between many of the songs- like the drunk Australian who was driving on the wrong side of the road and hit Souther's Lotus sports car stopped at a Stop sign. Souther had a split second to turn the car a little left so that it wasn't a straight head-on collision that probably saved his life as the fiberglass shell disintegrated around him.  He got out, staggered to a lawn as Don Henley drove up from behind a minute later. He tells Don, "Go look inside the glove box and make sure there's no cocaine," before the police showed up. There was no cocaine, but another interesting story from the high flying 1970's in the hollywood canyons. 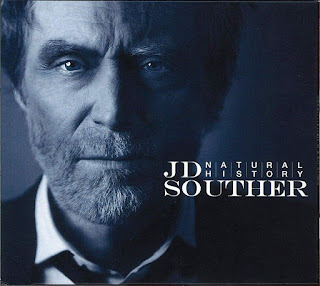 In putting together the playlist this week, I came across an absolute gem of an album that had escaped my attention during my many years working a day job. This is Souther's 2011 album of new stripped down acoustic versions of many of his hits by to other people or his personal favorites. I've included most of the recordings in the playlist, but I highly recommend you go out and buy JD Souther Natural History immediately, it is that good my friends!