September, 2020 finds me in my (almost) 50 year old house and she's starting to show her age. The past several months have been, "Oh Danny boy, the pipes, the pipes are calling" as the ol' copper pipes sounded like a jackhammer when we turned the water on. This condition in the plumbing biz is actually called, "water hammer" or as the plumber called it, "Hammer Time."

This past month has been a scene right out of Beetlejuice as the walls would rattle and the downstairs bathroom floor tiles were getting warmer and warmer. It finally dawned on me, "Dear I believe we've sprung a hot water leak underneath the concrete slab."

Well, After consulting my old buddy and contractor, Ron Zieman he guided me to go with a complete "Pex" repipe of the entire house. A repipe, cuts off the copper lines leading under the slab and are replaced with the Pex pipe rerouted within all of the walls and ceiling. Why, because you don't have to tear out the floor and slab to fix one leak, and then do it all over again somewhere else in the house and keep rolling the dice. 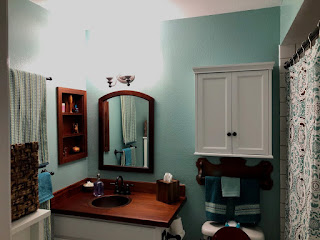 Anyway, the repipe and drywall jobs went great and I just have to repaint the exterior stucco by the kitchen, the kitchen, downstairs bedroom, laundry room and this downstairs bath just completed yesterday to the missus specifications.

The really cool thing now is we have new shower and bath fixtures in both bathrooms with great water pressure throughout the house, and you don't have to worry about flushing the toilet in the downstairs bathroom and scalding the person taking a shower in the upstairs bathroom anymore!

I still found time this week to musically go back in time to 1970 where 'they' came up with the brilliant idea to put the plumbing system underneath the concrete foundation.

So, I now got a new playlist to whistle while I work. Enjoy my friends, register to VOTE, and stay well.

Posted by Doug McIntosh at 6:04 AM