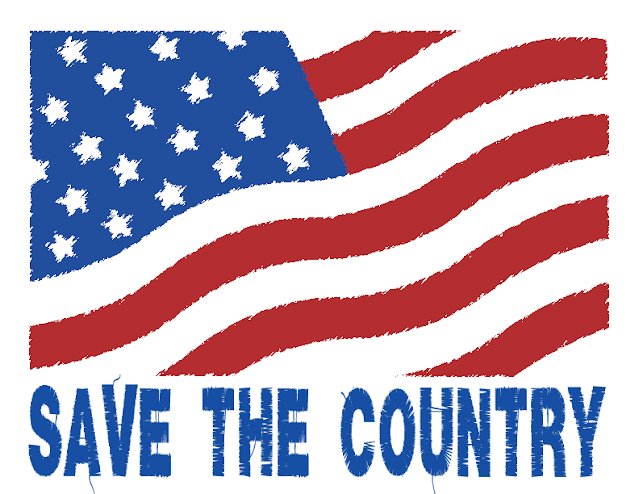 Two Days In January
January 6th - A Day of Desecration
A day, I as an American citizen would never have thought possible. Almost three weeks ago, a mob incited by President Trump, descended upon our U.S. Capital and created a violent insurrection against our constitution by trying to stop the legislative process to certify our 2020 Presidential election.
Back in October 2019, I created the American flag graphic above to go with a blog I wrote, Save The Country, 50 Years Later and the #WrongSideOfHistory. In that blog I used the 1968 song, Save The Country by Laura Nyro to frame my personal opinion where I stated, "After listening to 'Save The Country' 50 years later, I couldn't help but link the lyrics with our current political times under one Donald Trump as history's loop-tape back to the civil rights movement and the policies and behavior of the Nixon administration. These lyrics are as relevant today as when Laura Nyro wrote them in 1968 expressing her fortitude with the continual efforts to preserve our democratic principles and the dreams they are built on."
Come on, people, come on, children
Come on down to the glory river
Gonna wash you up and wash you down
Gonna lay the devil down, gonna lay that devil down 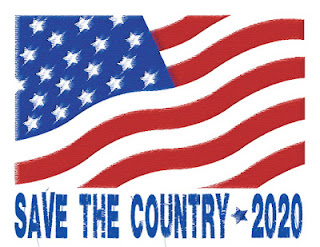 One year later in October 2020, I wrote another blog, The Senate A Silent Majority, and the #WrongSideOfHistory, where I updated the graphic by adding the 'electoral 2020' to go along with the featured song of that blog by Paul Hobbs, The Senate A Silent Majority. In taking inspiration from Paul's song I wrote, The present Senate majority (fifty-three) Republican senators have simply been, SILENT. Silent to act as Trump almost provoked a war with North Korea. Silent to act on any meaningful legislation like rebuilding our nation's infrastructure. Silent to act by watching immigrant children locked in cages at the southern border. Silent to act on the President's attempt to use a foreign power to influence our election. Silent to act on a world-wide pandemic with over 8 million U.S. cases and over 220,000 American deaths (so far). I could go on...
During this current month of January, that number of U.S. deaths is now over 420,000, not to mention Trump's impeachment for a second time in the House. Trump's impeachment trial in the Senate begins in February, and down the road, a (911-type) independent commission to investigate the entire insurrection, including the possible direct involvement by members of the House of Representatives and Senate. 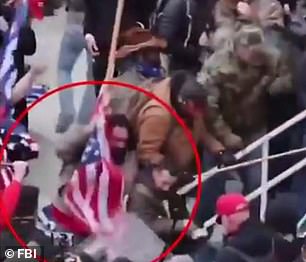 Now why I'm bringing up my American flag-Save The Country graphic again is due to the indelible video embedded in my brain forever of a particular Trump supporter beating a police officer with an American flag and pole. Now let that horrible irony really sink in because our waving flag is the definitive American symbol of our democracy.  For folks who talk about 'Patriotism' and 'Law and Order,' that specific act of terrorism toward that police officer within the totality of all the mob violence on January 6th, is the literal epitome of hypocrisy, and an haunting image I can't shake right now.
As an American, I have long destained the right's hijacking of the flag starting with it being 'Nixon's flag' and printed on everything from the 'mandatory' politician's lapel pin to patriotic underwear. The American flag represents ALL Americans, it flies over all of us.
I got fury in my soul, fury's gonna take me to the glory goal
In my mind I can't study war no more
Save the people
Save the children
Save the country now
January 20th - A Day of Democracy
Exactly two weeks after January 6th, President Joseph Biden is sworn in as our 46th President of the United States. The Capital is returned to its glory and the splendor of the ceremonies both day and night brings an exhausted feeling of relief to a weary nation. I have no illusions that we are anywhere out of the woods of lies fueling rage, but a new sense of calm has come over me. Only in America.
On January 20th, two songs lifted my spirits and are bookends for the playlist this week. One, Lady Gaga opens the inauguration by singing the Star Spangled Banner that started a very emotional day for me. Second, Katy Perry closes the celebration by singing her 2010 hit Firework set to a fireworks display over Washington DC that was a four-year rainbow exhale for our nation. I cried.
You just gotta ignite the light
And let it shine
Just own the night
Like the Fourth of July
On January 6th, I started this #NewMusicMonday January playlist to escape from the shear horror of what happened on this infamous day in history. The new music I have discovered this month has provided a great comfort from the daily news and video that has come to light from that terrible day.
Today, I'm hoping to retire my 'Save The Country' graphic from the blog forever. I'm feeling very positive for the days ahead in keeping the dream and riding the dove.
Enjoy the new music and covers this week my friends, stay well and mask-up.
Come on, people, sons and mothers
Keep the dream of the two young brothers
Gotta take that dream and ride that dove
We can build the dream with love, I know
We can build the dream with love
We could build the dream with love, I know
We could build the dream with love
Posted by Doug McIntosh at January 25, 2021
Email ThisBlogThis!Share to TwitterShare to FacebookShare to Pinterest
Labels: #NewMusicMonday, Save The Country