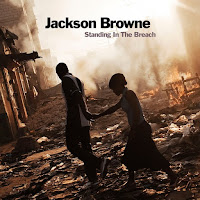 breach
/brēCH/
noun
1. an act of breaking or failing to observe a law, agreement, or code of conduct.
2. a gap in a wall, barrier, defense, (or period in time)

verb
1. make a gap in and break through (a wall, barrier, or defense).

2. (of a whale) rise and break through the surface of the water.

I googled the definition of breach to help me organize my thoughts for this week and help describe all my feelings from the experience of finally seeing Jackson Browne live, after all these years.

It was a wonderful concert. Jackson Browne at 66 still having a great singing voice, looking great and playing with a fantastic band behind him. The crowd was excited to see him and none more than San Diego's Bill Walton who'll I just say was our hands-raised after every song best representative. Bill, of course, just stands out. I spotted him right after the first song when the lights went up, sitting tall in the middle of the middle floor rows, kind of like he was just mixed in with the rest of us.

As Jackson gets into his set, this is when the breach part starts to creep into my mind. He isn't just playing a good-time summer re-run show of his 1970's hits, he's playing a lot of his 2014 album, Standing in the Breach. I love it, most of the crowd being the gray hairs we are, are very respectful giving heartfelt applause after each song. But then I start feeling a small but growing lack of attention vibe around me. The couple to my left start having a lengthy conversation. Two ladies right behind my wife, Mary Kit and I have actually been talking straight through the first several songs and seem oblivious when the volume drops and Jackson's voice is the lead instrument. We both use the quarter head turn around maneuver several times before they kind of get the visual hint to pipe down.

Now Jackson's also being Jackson as he makes several politically left comments throughout HIS show and anyone has just got to know that before buying a ticket or they haven't been paying attention to him in the last 45 years. Now the dude to the right of Mary Kit is a different sort. He is whistling loudly, even during some soft parts of songs until the guy in front of him turns around and tells him, "You're annoying." But here's the weird part, whenever Jackson makes a political remark, the dude yells, "bullshit!" It's like a time warp- Man, I loved you when I had long hair in the seventies and smoked pot, but now that I've grown into a conservative, I'd wish you'd just play the rock 'n roll and please stop talking. I'm thinking, did this dude ever listen to the words of any Jackson Browne song like, Before the Deluge?

So Jackson's playing on, starts at 8:05 and ends a little after 11:00 pm with a 15-minute break in between. He has a strong set (here is the list), the band in total sync, calm and in command. This past week, I read a review of his show in Pittsburgh, Oct. 2014, Concert review: Jackson Browne tour puts the focus on new songs. You can read it, but the reviewer basically blasts Browne for having the audacity to play his new songs when people like him should only show up for the last half hour when he plays his rocking hits of the 70's. This undoubtedly is the same tired review all great musician's get ad nauseam after world stage success early in their careers and cursed for writing and performing anything new to the masses after their major hit cycle. Jackson actually handles these situations with humor. During the concert, he remarked after several insistent fans kept shouting at him to sing one of his old hits (and I paraphrase), "Our relationship is like a marriage, you keep saying it and I want to do just the opposite. And, as we often say in marriage, I heard you the first time."

So, I read the breach definition and had a couple of thoughts. First, the crowd was great but some were bored liked the reviewer above as they themselves failed to hold their own attention to something new and just wanted the familiar. Second, was Jackson himself, a whale rising and breaking through the surface of the ocean. May we all continue to break through in the things we do and with the support of others (whatever the size of our personal fanbase) actively attending in the process.

Here are the lyrics to Standing in the Breach. I love his belief that self-determination is the key, that no matter natural or man-made disasters, it's only each one of us to make or rebuild our world in the place that it can be.

One last thing, you love rock 'n roll, so The Birds of St. Marks is a song in your wheelhouse that Jackson Browne wrote in 1967 and recorded on the new album. For me, this was my favorite moment last Wednesday night. The moment when you get that excitement rush, like when a band and a song all come together.