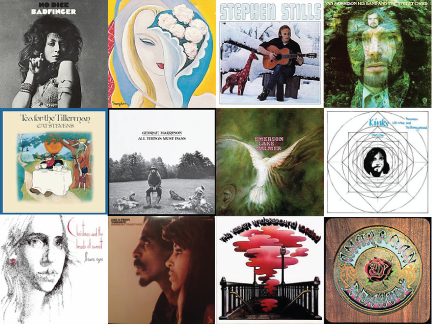 First, fifty years ago today is a wonderful BBC Concert with James Taylor. James has gone into his music vault and has remastered the original British television broadcast into YouTube video clips. I was impressed by the audio quality and I think you will enjoy his playlist as he has recently been releasing a song a week from the concert. So far, he has released nine videos, and don't hesitate to come back here to see if he's added a few more.

Second, is the very impressive month of album releases from November, 1970. I couldn't believe how many great albums were all released in this moment in time. I put together a playlist of seventy-two songs rather quickly as you will see I basically lifted almost all the songs from several personal favorites.

A quick story. I'm fifteen and had a bunch of kids over from my church youth group. Being painfully shy, the thought of being a host for anything was terrifying. As the kids started coming into my family room and gathering, I was flummoxed, what to do to get this thing rolling? I had recently purchased Cat Stevens' Tea For The Tillerman and quickly retrieved it from my bedroom. I put the record on my parents stereo console in the family room and took a breath. Tommy Wishard, a couple of years older than me and a star basketball player at my high school, turned to me and said, "I love this album!" The evening went well, and another day saved by rock 'n' roll, not to mention my mom's French onion dip for the chips.

So I think I have you covered this week, enjoy, stay well and mask up!