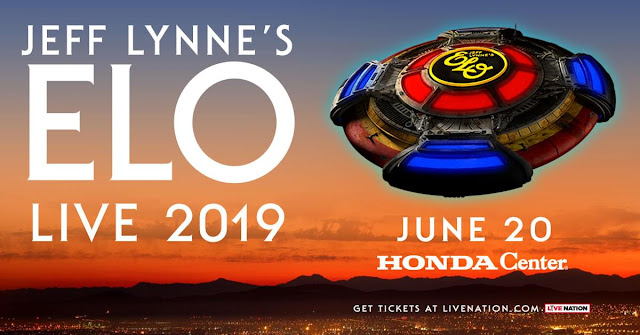 Last Thursday, I got to see Electric Light Orchestra (ELO) which since 1972 has been the sole embodiment of the brilliant Jeff Lynne. Jeff's career as leader of ELO also includes being a solo artist, a member of the supergroup Traveling Wilburys, record producer of many artists, and long overdue induction into the Rock 'n' Roll Hall of Fame in 2017.

Much like Paul Simon assembled for his touring band over recent years, Jeff Lynne's ELO is a tour de force of talented musicians that propel ELO's rock-symphony sound into the twenty-first century. That sound is in fact so well produced live to the band's recorded discography (and this is not a slight) that anyone can appreciate the musicianship, not to mention bringing several generations of fans to their feet, clapping and singing along to an extensive list of hits. So many big hits, that I had forgotten the stamp the 71 year-old Jeff Lynne has as a tunesmith in rock 'n' roll history.

The band kicked off their 2019 tour at the Honda Center in Anaheim and here's a quick review by Steve Baltin.  In a rare move on my part, I've duplicated the setlist through mostly higher quality concert videos in my playlist this week. I've also added a couple of classics at the end not in the current tour rotation.

So, jump back into the ELO spacecraft where two young 20 year-old's sitting next to me at the show where transported back to the early 70's through mid 80's, and were completely rocking out, not to mention the throng of sixty-seventy year-old gray hairs.