I'm not an Alice Cooper fan, but his timely June, 1972 release of School's Out was a big hit with all the kids back in the day. Years later as a teacher inside the educational system, I remember our host playing School's Out at a year-end staff party at his house with assorted beverages. I was ready to hit the beach.

On a recent weekend trip to Santa Maria to see my mother, I was driving on a two lane blacktop back road (the old Highway 1) heading down from the Nipomo mesa to Oceano. I suddenly had a flashback of being on this same stretch as a 14 year old in the summer of 1969 with pals, Ron, Paul, and Gary on our bikes. As I remember it, they were all on their 10-speed bikes, but I had my sister's old three-speed clunker as my 10-speed had recently been stolen from my front driveway, the frickin' nerve. I even wrote a letter to the Santa Maria Times editorial page warning of the rash of bike thefts at the time. That bike was a jewel with its metallic pearl white finish.

So the lads and I just out of school head out one early morning west of Santa Maria on Main St. (166) to the little town of Guadalupe.
Note- I guess living in a small town in the late 60's our parents would just let us take off on our bikes to go beach camping by ourselves. I can't even imagine a parent letting a 14 year old do that today.
Anyway, somewhere on the often dangerous two lane to Guadalupe, Gary gets a flat tire and we waste a good part of the day walking to a gas station in Guadalupe to get the tire patched. Then we head north through the eucalyptus trees on Nipomo Highway 1. I remember we rode past one of the old junkyards that used be there in the woods and suddenly several junkyard dogs emerge chasing us on this backroad. My friends on their 10-speeds put their bikes into gear and easily sped away from the dogs. I on the other hand with a rusty chain in a single gear was instantly the sole target now standing and frantically pedaling to get some speed. With the handlebars swaying from side to side I thought I'd finally pumped up enough speed when suddenly I feel a stinging pain as the lead dog sinks his teeth into my right ankle. Winded and defeated, I ride up to the rested and waiting boys. They ridicule the old family 3-speed, and revenge visions of catching my 10-speed bike thief in his criminal act come back to play in my head.

So, we proceed on our bike journey and come to a downward grade (pictured above from Google Maps).  I will estimate it is about a mile long as you come out of Nipomo. It drops into a left turn on Highway 1 that leads into Oceano and then north to our destination, the Pismo Beach Campgrounds.
The boys take off for the glide and brake down the hill as I follow in tow. As I pick up speed, the bike starts to shake, rattle and rattle some more. I apply both the front and rear brakes on my handlebars... nothing! I'm now speeding down this hill in this rocket rust bucket as the worn down brake pads serve only as a hood ornament.
If you look at the picture where the road bends, I think this is the spot where I was going to attempt to ride up the side of the hill to slow myself down. Unfortunately, my front tire flipped sideways as it hit the dip at the edge of the asphalt. This did stop the bike cold, but my inertia propelled me straight over the handlebars in a momentary superman fashion before landing hands first sliding across the road for probably 5 or 6 feet. Luckily, I was wearing my trusty Levi 501 jeans that protected my knees, but my hands absorbing the impact were a fire hot red from the horizontal skid on the pavement. I picked myself up, the bike actually still rideable. I then straddle the bar with my tennis shoes acting as my new brake pads until I get to the bottom of the hill, where I find the boys rested and waiting for me. 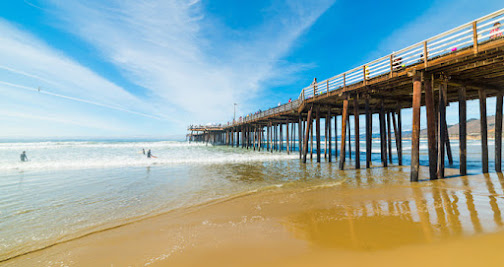 When we finally got to Pismo Beach, I remember going into the pacific ocean with the healing properties of the salt water washing over me like a cool blanket. School's out. I'm surrounded by great friends, free and on our own as young teenagers on the central coast of California with many fun days of summer still ahead.
Enjoy the eclectic sounds of June, 1972 with the Eagles debut album, David Bowie taking off as Ziggy Stardust, Aretha's gospel roots on full display, Leon Russell's great songwriting, and Jethro Tull with sort of a compilation album with some songs never released in the U.S. before. No format radio here. Take it easy my friends and have a great summer!
Posted by Doug McIntosh at June 20, 2022 1 comment:
Email ThisBlogThis!Share to TwitterShare to FacebookShare to Pinterest
Labels: Aretha Franklin, David Bowie, Eagles, Highway 1, Jethro Tull, Leon Russell, Nipomo, Oceano, Pismo Beach, Summer
Older Posts Home
Subscribe to: Posts (Atom)