It's been 43 years since the Eagles played The Fabulous Forum for the first time. I did not see any of those famous Forum shows, but did see the band in 1979 at the Sports Arena in San Diego. Back in the day, both the Forum and the Sports Arena were designed for sporting events, not music concerts. But as rock 'n' roll acts got bigger and bigger arenas became prime locations for rock concerts.

I saw Elton John at the Forum in 1974 and remember what many would call "the sound bounce" off the walls, but nothing was worse than the Sports Arena bounce if you were sitting up high. Speaking of high, most were, so I guess the acoustics didn't matter much but to a nerd like me.

The Sports Arena today is a tad better with probably a $1000 worth of hanging ceiling panels to baffle the sound. I did still hear the sound bounce several times at a James Taylor concert at the Sports Arena (now called the Valley View Casino Center) in 2015. James Taylor, really... Yeah James Taylor and his wall of Marshall amplifiers!

Now the Forum is a whole different story these days and truly a horse of a different color. In 2012, the Madison Square Garden Company purchased the Forum and immediately put $50 million into a complete renovation including $18 million more by the City of Inglewood. A good deal of that money went into transforming the acoustics in the building. In 2015, I saw Don Henley on his Cass County Tour, I couldn't believe the sound quality of not only the excellent band, but the building itself, it was well, fabulous!

So this past week on September 12th, we continued (my wife) Mary Kit's passion of seeing either the Eagles or Don Henley somewhere on the west coast of the United States, as much as possible. This time it was the Eagles first night stay at the Forum.

On this first night of three concerts at the Forum, Don opened the show with the announcement that their manager, Irvin Azoff would probably be making a boxed set of these shows. I'm thinking to myself, how many boxed sets can the Eagles make of their 1970's material and who's going to buy that? Well, I looked to my immediate right, and my lovely wife says to me, "Oh I'm getting that!"

Okay, if you read or watch TV you know that Glenn Frey died in 2016 and the Eagles then added Vince Gill and Glenn's son, Deacon Frey to the band. This has literally proven to be a sound move on the band's part to first- continue the legacy of Glenn through Deacon and then, bring in one of the finest singers and guitar players in Country music with Vince Gill. Both add tremendous new elements to a very familiar act and harmony of sound that has defined this band and a generation of fans. You'd think the sea of gray at the Forum was an AARP convention.

This new version of the Eagles were perfect from my old ear, and I mean perfect musically and vocally. Both the band and building made the sound magical, and this is an audience who knows every word of every song in this sing-along night with every guitar lick as clean and clear as their album recordings.

Now that brings me to Don Felder and his famous dismissal from the Eagles in 2001. Much has been made of this over the years. My idealistic hope was that after Glenn's death, maybe Don Henley would see the light like both Glenn and Don did on their 2014, History of the Eagles Tour when they invited Bernie Leadon back for that tour. I will say when I saw that that tour here in San Diego, I had tears in my eyes on that night when Bernie come on stage. Nobody even dreamed of Glenn's passing just two years later, but I was hoping against hope that bygones would some how be bygones, but that wasn't going to be. If you don't understand what I'm saying, just watch the 2013 documentary, History of the Eagles on Netflix.

So whatever you think of Don Felder, nobody can deny his contribution to the songs and sound of the Eagles. Today that lead guitar sound and back up vocals is filled by a very accomplished musician named Steuart Smith. Steuart replaced Don Felder in 2001 and has been with the band ever since. He is also a band member in Don Henley's band on his solo tours. In 2007, the Eagles last album of original material, Long Road out of Eden has five songs where Steuart Smith shares cowriting credits.

I thought for this post, I would be writing about Vince Gill, who was fantastic in his own right on backup vocals and guitars with also some great shining moments on several lead (Glenn) songs. I was glad they let him sing one of his solo hits, Don't Let Our Love Start Slippin' Away. I guess if Joe Walsh gets to do his solo hits at Eagles concerts then the others can now get a solo hit into the Eagles' setlist. Hell, they even did Don's, Boys of Summer to our delight!

But for me, I kind of zeroed in on Steuart Smith as he has a unique position in the band- a first tier player on the front line, but with second citizen status as a band partner. He plays right next to Joe Walsh and shares as many lead guitar duties as Felder always did. In fact Steuart Smith had so many close up shots on the big screens behind the band simply because he's doing so much of the lead guitar playing.

I'm sorry but I was kind of appalled that he was never introduced during the evening, not even a shout-out after several great songs where he did most of the heavy guitar work. This just struck me as odd. He should have been out there with the band taking their final bow at the end of concert, especially with the future box set cameras rolling. (At a Paul Simon concert this year, Paul literally introduced every member of his large ensemble band, and that goes a long way with enduring fans.)

I'm sure Steuart Smith has no complaints, is paid extremely well, and is as happy as punch to be in the Eagles for the long run.

(And if the Eagles [=Don Henley] won't do it in their show, here's my appreciation for the man on the far right of this picture below. And to be fair to Don... here's an entertaining article of Don ejecting a concertgoer for shouting Don Felder's name while introducing Steuart Smith at a 2015 show in Detroit.) 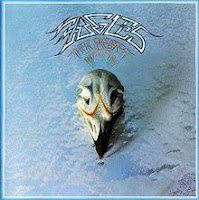 If you get a chance, try to see a concert at The Forum, you'll have a great experience. As for the Eagles, they are still flying high with their two new band mates. Deacon Frey is not a gimmick. At 25 he has big shoes to fill and is doing a great journeymen's job. The new pairing with Vince Gill is brilliant marketing but backed with a quality of sound that is unmatched, not even by the original members of the Eagles.

I decided not to do a playlist this week because you've already have heard the Eagles tunes a million times. If you can, try to see the Eagles live (see current tour) once before they are gone as a group; it's as crisp a sound as putting on a new vinyl record of the best selling album of the 20th century, Eagles Their Greatest Hits (1971-1975).
Posted by Doug McIntosh at September 17, 2018 3 comments:
Email ThisBlogThis!Share to TwitterShare to FacebookShare to Pinterest
Labels: Deacon Frey, Don Henley, Eagles, Joe Walsh, San Diego Sports Arena, Steuart Smith, The Fabulous Forum, Timothy B. Schmit, Vince Gill
Older Posts Home
Subscribe to: Posts (Atom)