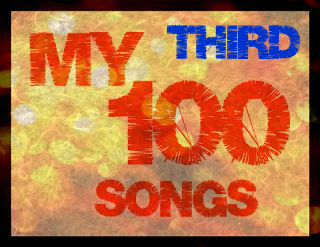 If you've been following this series of now the THIRD grouping of 100 of my all-time favorite songs then you will be acutely aware of my favorite band, The Beatles.  For this third round, I actually went through every Beatle album and basically spread my favorite Beatle songs over the three current playlists. I say current, because it's not so much changing my mind, but more a shuffling of the deck of fantastic songs as I add more songs. I also said in the first list of 100 that I would not rank the songs, and I have continued that here.

The only thing that will remain a tradition as I have just started my FOURTH 100 Songs offline is that this series of playlists will start and end with Beatle songs as that is the dominate gene in my rock 'n' roll DNA.

Speaking of The Beatles, my pal Paul Hobbs turned me on to this great book, Paul McCartney: Many Years From Now (Amazon link) that I'm currently reading (and I wonder what made me go through every Beatle album this past week?).  I bought a used hardcover that was in great shape, but recommend if you like reading on your back, you opt for the paperback version, because She's so heavy, heavy, heavy, heavy...

Posted by Doug McIntosh at June 08, 2020 No comments:
Email ThisBlogThis!Share to TwitterShare to FacebookShare to Pinterest
Labels: My THIRD 100 Songs, The Beatles
Older Posts Home
Subscribe to: Posts (Atom)