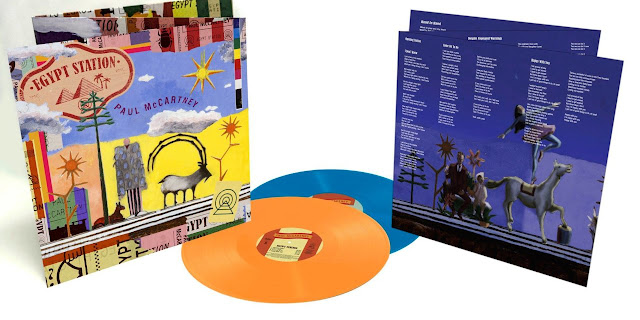 Awhile back I did a sneak preview of Paul McCartney's new album, Egypt Station with a couple of YouTube songs released before the official September 7th release date. The highlight of that blog was my inclusion of the James Corden piece with Paul McCartney Carpool Karaoke which I have included here again at the end of the playlist.

For this week's release of the album, I was able to snag every song from the new album off YouTube from various sources. Here's the album on Amazon Music if you have a subscription.

This is Sir Paul's 17th solo album that he's calling 'a concept album' but I couldn't hear the travel or any other connected themes other than love or want of. I still think its a very good album that is worthy of a start to finish listen to as we used to do back in the day. I've only seen pictures as shown above of the album cover, but Paul's really put a great deal of visual art into the vinyl album that I think many fans will love to look at and read the liner notes while listening. Here's a link to buy on Amazon.

I start this playlist with three Jimmy Fallon videos with Paul on his show promoting the album last Friday, September 7th. I always enjoy Jimmy's love for Paul that now extends across several generations of fans.

If you want to read a review of this album, just read Rob Sheffield's Rolling Stone review here, with the opening line - "Make a list of all the songwriters who were composing great tunes in 1958. Now make an overlapping list of the ones who are still writing brilliant songs in 2018. Your list reads: Paul McCartney."

So happy Monday and start (or end) your day enjoying Paul's new music and sense of humor here!