Songs of 1960-1962  concludes my mini-series Under The Influence. This series is based on my primary source, Wikipedia and their organization of music through the years. What I found interesting about Wikipedia's (Year) In Music entries is their succinct 'Events' highlights. Then, new albums released are listed alphabetically for the entire year, until 1963.

In 1963, Wikipedia entries go from a yearly album overview, to a month to month breakdown of mostly all popular albums from that month in time. As it turns out, rock 'n' roll is a lot bigger deal than the short-lived fad that many in the short-minded establishment predicted would quickly fade away.

In 1964, popular music just explodes with The Beatles coming to America and the The British Invasion.

On January 28th, 2019, I started my Fifty Years in Music • (Month and Year) Series starting with January, 1969. I noticed in going back to find that first post of the series, that I actually had skipped several months along the way. I will correct that, and at some point will have a Monday Monday Music™ historical record of the music that has influenced my life, and probably yours, since 1949.

My long-term game plan will be to have two concurrent 'Way Back' series– my current Fifty Years in Music that will cover the 1970's, and starting in 2023– Sixty Years of Music to cover every month and year of the 1960's, starting in 1963.

Now one of the things I have mentally done over the years in the reflection of my life, is that I play the game, What If...

But, I did have an alternate plan of becoming a History major and teaching History at high school as it was my favorite subject in all of school. In my recent shoulda coulda reflections, that would have included a minor in English, but at 18 years of age, writing something more than a school assignment was something that I was never going to do. Later at San Diego State, I had to pay other students to type my assignments that required a typed finished product.

So as a pretext here, I'm writing (typing on my laptop from the home row) about music every week that often goes back in history to the second half of the 20th century. 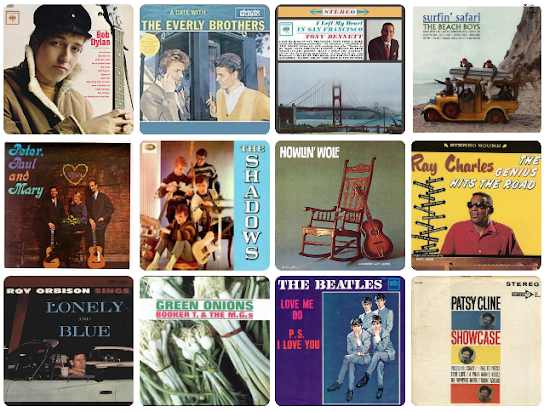 1960 through 1962  is still about Elvis, but the King is already transitioning to ballads as many rock 'n' roll bands are forming in England and America and preparing for their own ascent to #1 on the Billboard Hot 100, if not the rock 'n' roll throne.

In putting the playlist together, I was amazed at how many electric guitar instrumentals were huge Billboard 100 hits creating the whole surf music craze of the early 1960's. I think the public had just fallen in love with the electric guitar and you could see how every kid interested in playing music, simply had to have one.

Note- All dates and timeline descriptions below in italic are from Wikipedia. What I have done in this cut and copy exercise is to only include the interesting and influential stuff (from my perspective) from 1960-62. I have also interjected some (mostly sarcastic) commentary of my own in regular text.


In 1960, I was five years old and at that time probably didn't know any of the songs on the playlist this week as my primary exposure to music was pretty much a Baptist church gathering, starting with...
Jesus loves me this I know
For the Bible tells me so
Little ones to Him belong
They are weak but He is strong

I do remember a firecracker redhead kid who moved to Santa Maria in 1960 named Billy DeVoe who routinely disrupted my Sunday school class pretty much from kindergarten through high school. I am thankful that a strong Jesus did in fact bring us together as we remain best friends some sixty years down the road.

However since our college years, we have both come to doubt the fantastical stories and religious fervor that attracted a good number of adult odd-balls and goof-balls from our town to congregate. As adults ourselves, we would never socially mix with such a fearful and loathing group of people lead by Franklin Graham-like ministers, including a string of creepy youth/music ministers who probably turned a good number of our peers around to end up playing for the agnostic team. My disruptive friend was in fact the only 'normal' thing I took from that place. By the way, who in their right mind would sit in those extremely hard pews for hours at a time, listening to a guy who believes three guys are thrown into a large fiery furnace and are just walking around inside the furnace.  I believe in miracles/ where you from/ you sexy thing...

My other thoughts about 1960 or thereabouts take me back to 300 West Sunset in Santa Maria, CA. Specifically, the time my dad started digging a six foot hole and trench from inside of our house in the hallway heater closet, to underneath the middle of the living room. Now before you make the leap that my dad was bat-shit crazy, let me provide a little context.

In talking with my mother and younger (twin) brother and sister this past week, we think it probably was more around 1962 because I would have been seven and the twins around five. This also is the timing of the Cuban Missile Crisis as one of our neighbors down the street had actually dug and built a bomb shelter underneath their front yard. Okay, now THAT DAD was bat-shit crazy, but my dad was just a Baptist.

In the early 60's, my dad climbed telephones poles for General Telephone Company and my mom was a housewife. They didn't have a lot of money when they bought the Sunset house for $13,500 in 1956, and later discovered the hot water leak underneath their concrete slab somewhere between 1960-62. I wish my dad were here to tell us the exact timeline, but he's eternally on a back nine foursome with the father, son and the holy ghost...

Anyway, my mom tells me the living room floor kept getting warmer and warmer and the hot water in the sinks and bathrooms were down to a trickle. There definitely was a hot water leak, and my dad without means to pay an expensive plumbing bill much less hire a lawyer, became a plumber. My dad could do anything, he could be a mechanic, carpenter or any general fix-it man depending on the breakdown. So my dad enlists my uncle's Skeet and Leslie, and they take out the heater and start digging this huge hole in our hallway and piling a mountain of dirt on a large army tarp in the backyard (thanks Steve for that specific dirt memory).

So what do you think the neighborhood was thinking, as my mom recalls, "word spread quickly."
"Bud's gone crazy! He's building a bomb shelter underneath his house!"

Here's my outstanding memory of that event in time- I'm standing in the hallway looking down at my dad in the hole (with his head below ground level) and he's smiling up to me. The black and white TV is on in the living room with Dizzy Dean and Pee Wee Reese calling a baseball game, sponsored by Falstaff Beer. I love how Diz would turn to Pee Wee and call him, "podnuh."

The Playlist this week was a fun task of mixing 1960 pop, folk, R&B, country, jazz and new TV show themes all together in 60 songs. Some of these songs you'll recognize as 70's hits made famous as covers from these 1960 originals. Enjoy and stay well my friends.


Note - The Theme for Bonanza actually started as a TV show in 1959. Also in 1959, The Dave Brubeck Quartet's Take 5. I just couldn't let those two not be part of this collection of songs.