It's kind of been a Ringo couple of weeks for me. Got tickets to see Ringo and his All-Starr Band October 2nd in Paso Robles with VIP seating, oh boy living the high life! With that, I received in the mail a Ringo t-shirt that I'm wearing as I write this and also a Ringo canvas bag and poster that I have on my office wall. I was never in the The Beatles Fan Club or saw them live, but now, I finally get to see a Beatle! 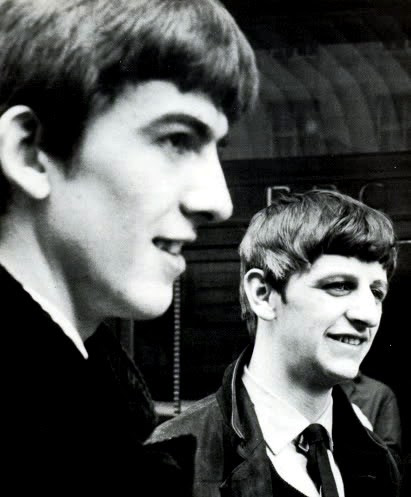 So what's been playing in my head all week, It Don't Come Easy written and produced by George with Ringo assisting in 1970. George was so kind to his dear friend that he gave the song and all writing credits to Ringo. It got me thinking, these guys had been through so much together as struggling to famous musicians that their friendship could never be shaken . As the Beatles were now broken as a group in 1970, George and Ringo would just continue to be the great friends they were, bonded forever. It Don't Come Easy was released as a Ringo single in 1971 by Apple Records and went to #4 in the UK and US single charts. The song gave Ringo an identity outside The Beatles and kick-started his solo career. And George, just giving and being the great friend he was to Ringo.

Most of us have developed an extended circle of friends over the years. But if you are so lucky, you may also have a much smaller group of friends who you grew up or went to school with, and they still mean the world to you. As you grow older, you start to realize that getting new friends in your inner circle, don't come easy.

Deep friendship is a powerful gift. The trust between two great friends is understood and unshaken even if you don't see or talk that much together on a regular basis. Once you are in the presence of a great friend, it's like you both never skipped a beat, you are talking and interacting just like you did years ago, well maybe with a bit more maturity. Great friends are simply timeless and so is this song!