This week's post is inspired by my daughter-in-law's Twitter post @kimzebor from Mashable's That '60s show: What American high school students dressed like in 1969, Oct. 1969 Hippie high school, When students (and teachers) turned on, tuned in, and dropped classes by Chris Wild, Retronaut. Once seeing these images, My own time machine started reeling in the years back when I started Santa Maria High School in September, 1969 as a freshman. In the fourth picture down, (shown here on the right) is an image which includes a MG (Model A) sports car in the background similar to my '57 MGA and first car, purchased when I was a junior. What a time!

So I got to thinking about 1969 and the songs that came out that year. I first thought about the Beatles White Album, but that was actually released in November, 1968 and then I remembered how my sister and I loaded in with my good friend Ron Zieman, his sister and parents into their family station wagon and drove to Santa Barbara for Christmas shopping. In a department store, Ron had found the new White Album and got it as a present. I can't remember if he had to wait until Christmas, but I imagine we went straight to his bedroom and immediately listened to it, like so many other albums of the day - CCR, Buffalo Springfield, The Rolling Stones and one of Ron's favorite bands, Cream. 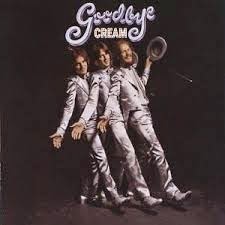 Cream had broken up in 1968 and released Goodbye in the United States in February, 1969. The album as a whole is a bit forgettable in that there are three live tracks and three original tracks from the band. Badge is the definitive single from the album and is one of my all-time favorite songs. Badge has a very distinctive Abbey Road (released 9/26/69) guitar sound that is attributed to the master collaboration of Eric Clapton and George Harrison (who co wrote Badge and is listed as "L'Angelo Misterioso" – rhythm guitar on the original jacket back cover, click on below.) The guitar solo is so Beatlesque, your ears say it is George, but Eric would have to tell us, how it all came to be. So without further adieu, one of the best songs of 1969 and all time. 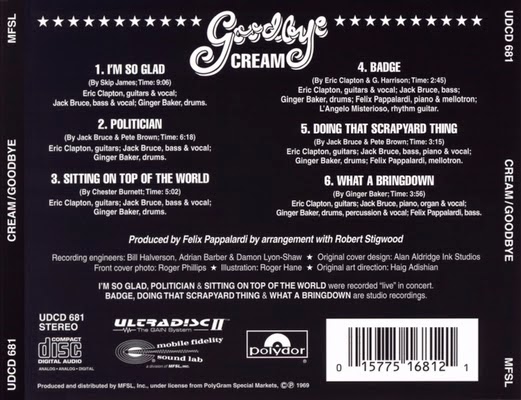