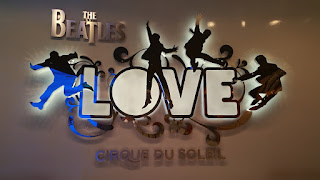 In 2006, Cirque du Soleil under the direction of Dominic Champagne opened Love at the Mirage in Las Vegas. The show was written and directed by Champagne with musical direction by Sir George Martin and son, Giles Martin. Many of my close friends and family including Mary Kit and I, have created our own little mecca, in that we have made the pilgrimage to the Mirage many times to experience the show.

It has been ten years since the opening and Giles Martin and Dominic Champagne have a nice surprise for all the faithful as they have been working on a refresh of the original production for sometime now. Read this article by Robin Leach as Major changes at Cirque’s ‘The Beatles Love’ are two years in the making.

With the passing of George Martin in March of this year, "the 5th Beatle" who produced, composed, conducted and collaborated with The Beatles on all their original works, Giles continues his father's legacy as he carries the torch and keeps the lads fresh and in our hearts.

This Thursday, July 14th, Ringo, Paul with Olivia Harrison and Yoko Ono Lennon return to the Mirage to celebrate the 10th Anniversary of the show and experience the latest version. If you have tickets to that show you are one lucky (or connected) individual! Mary Kit and I already have our tickets for an October pilgrimage where we will also see the Rolling Stones at the new T-Mobile Arena in Las Vegas, not to mention Ron White also at the Mirage. Ron White actually has a really funny bit that he does in his Netflix special about seeing Love (being a Mirage VIP and all).

7/15/16 update - Here is a review after the 7/14 show by Rolling Stone magazine,
Beatles' 'Love' at 10: Paul, Ringo and Friends Celebrate Revamped Show

Here is a short playlist to wet your whistle for the new show and a trailer for the new Ron Howard documentary in September, Eight Days A Week - The Touring Years (LA Times), that chronicles the boys touring days from 1962-66.

Posted by Doug McIntosh at 7:51 AM