Mudcrutch, Tom Petty's Back to the Future Band 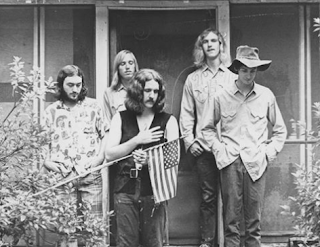 "Mudcrutch was formed in 1970 by Tom Petty and Tom Leadon, who had been playing together in a band called the Epics. Mudcrutch's lineup consisted of Tom Petty (bass and vocals), Tom Leadon (guitar and vocals), Jim Lenehan (lead vocals), Randy Marsh (drums) and Mike Campbell (guitar). Leadon and Lenehan left the band in 1972 and were replaced by bassist/guitarist/vocalist Danny Roberts. Keyboardist Benmont Tench also joined the band. Ricky Rucker was a part of the band for a short time. Mudcrutch served as the house band at Dub's Lounge in its hometown of Gainesville, Florida. 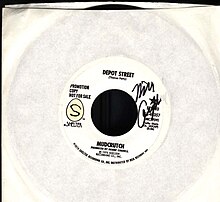 Depot Street vinyl, signed by Mike Campbell
In 1974, Mudcrutch signed with Shelter Records and re-located to Los Angeles, California. The band released one single, "Depot Street" in 1975, which failed to chart. After Danny Roberts left the group, Petty invited Charlie Souza to take over on bass guitar and the band continued recording in Leon Russell's Tulsa Studio, and later at Leon's Encino California home. The band's record company broke them up in late 1975. Petty, Campbell and Tench went on to form The Heartbreakers in 1976 with fellow Gainesville natives Stan Lynch and Ron Blair.[1]"  From Wikipedia 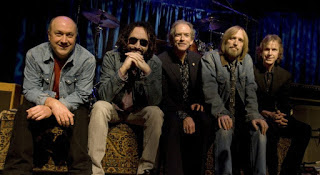 Now jump to the summer of 2016 as Mudcrutch just played and closed their tour here in San Diego, last Thursday (6/30/16) at Humphreys by the Bay. I missed the show but it looked and sounded great from the YouTube videos (with much thanks to s2seltaeb and BlissTanger YouTube Channels).
Mudcrutch isn't a household name like Tom Petty and The Heartbreakers and a lot of people don't know anything about this old/new band. I think they've keep this laid back approach intentional with little network television promotion pumping them up. They aren't doing this reunion and tour for the money and fame. This is about the music and it being played live in smaller venues
to a core group of dedicated fans.
I just got the Mudcrutch 2 album last week and love it. I also love this album cover and had to order a t-shirt replica online. The band and the album give you that early 70's mix of rock 'n roll, country and blues like so many bands were doing at the time that I just ate up as a teenager. I don't know if they recorded this album using older analog audio equipment like some bands are doing again, but it has that sound that says, 1971 is calling and wants you to listen to this.
So take a look and listen to my Mudcrutch Playlist below as I've collected music videos from the first 2008 album plus #2 and a few bonus concert covers too. Enjoy my friends.

Posted by Doug McIntosh at 7:24 AM