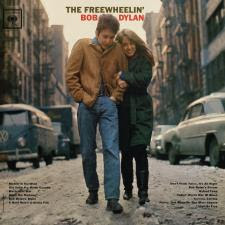 A Hard Rain's a-Gonna Fall was written and released by Bob Dylan on The Freewheelin' Bob Dylan album in May of 1963. At the time, the song represented to many the dawning of a nuclear war apocalypse fresh in the minds of everyone from the October, 1962 Cuban Missile Crisis. Dylan has said he wrote the song well before the missile scare with the Soviet Union, and stated that in fact, "the lyrics were taken from the initial lines of songs that 'he thought he would never have time to write.'" Wikipedia

The inadvertent timing of the missile crisis and release of the album will always tie the song with images of war. I was reminded of that in recently watching the new Ken Burns and Lynn Novick documentary on The Vietnam War this past week on PBS. The song is used to open the series in episode one, and aptly titled, Déjà vu . As I watched the episode, I thought about how that song is tied to our 60's soundtrack but still rings timeless today with its many themes that have been interpreted many times over. Déjà vu is appropriate now as simply a lesson of history tending to repeat itself . The song is the perfect anthem for our current world events- the political rhetoric between Donald Trump and Jim Jong-un, the environment and climate change, protests of injustice in the streets and on the football field, the weather and natural disasters to name a few headlines of the past two weeks.

What I take from A Hard Rain's a-Going Fall is, be ready. Be ready to deal with the unfairness in an unfair world. That doesn't mean we stop working to make our world a better place, it means, look at the world with an open mind and be there for others who need you.

Oh, what’ll you do now, my blue-eyed son?
Oh, what’ll you do now, my darling young one?
I’m a-goin’ back out ’fore the rain starts a-fallin’
I’ll walk to the depths of the deepest black forest
Where the people are many and their hands are all empty
Where the pellets of poison are flooding their waters
Where the home in the valley meets the damp dirty prison
Where the executioner’s face is always well hidden
Where hunger is ugly, where souls are forgotten
Where black is the color, where none is the number
And I’ll tell it and think it and speak it and breathe it
And reflect it from the mountain so all souls can see it
Then I’ll stand on the ocean until I start sinkin’
But I’ll know my song well before I start singin’
And it’s a hard, it’s a hard, it’s a hard, it’s a hard
It’s a hard rain’s a-gonna fall
Copyright © 1963 by Warner Bros. Inc.; renewed 1991 by Special Rider Music

*footnote - I've alway loved the cover jacket of Free Wheelin'. It's a picture of Bob with his girlfriend, Suze Rotolo who had just returned from Italy. The picture is genuine. The album has some heavy, deep songs but there they are just walking down a winter street in New York City, happy and in love. That juxtaposition is just one of the reasons why it's one of the greatest albums of all time.
Posted by Doug McIntosh at 7:36 AM