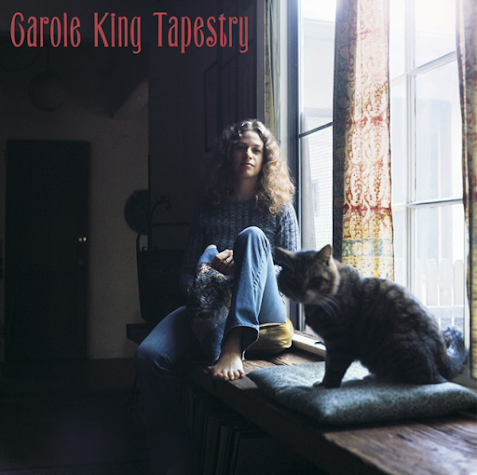 "The singer-songwriter genre was named around 1970, give or take, and was said to apply to me and, among others Joni Mitchell, Cat Stevens and Jackson Browne. Why that supposed movement didn’t begin with Bob Dylan or even Woody Guthrie or Robert Johnson beats me – maybe they were still “folk”. But, if it means anything, Carol King deserves to be thought of as its epitome. I’d been deep into her songs – Up on the Roof, Natural Woman, Crying in the Rain – for a decade before Danny Kortchmar introduced us in Los Angeles in 1970. She played piano on my Sweet Baby James album while working on the songs for her own Tapestry. Our collaboration, our extended musical conversation over the next three or four years was really something wonderful. I’ve said it before, but Carole and I found we spoke the same language. Not just that we were both musicians but as if we shared a common ear, a parallel musical/emotional path. And we brought this out in one another, I believe.
It was a big change for Carole to leave New York for LA. She left behind an established, hugely successful career as a Brill Building [era] tunesmith, with her husband and lyricist, Gerry Goffin, and went west, on her own, with two young daughters. She started writing by herself, about herself – that is to say, from her own life. It came out of her so strong, so fierce and fresh. So clearly in her own voice. And yet, so immediately accessible, so familiar: you knew these songs already. I had that experience the first time I heard Carole sing You’ve Got a Friend from the stage of the Troubadour: “Oh yeah, that one.” Incredible that this song didn’t always exist. Carole’s focus was her family: [children] Louise and Sherry, and imminently, Levi and Molly. She had no time for the stuff the rest of us in Laurel Canyon were up to. She had her family and her songs. Certainly she would have her adventures, dramatic emotional switchbacks, in years to come. But in those days, she seemed to watch the dancers with a kind, wry detachment. To me, she was a port in the storm, a good and serious person with an astonishing gift, and, of course, a friend."

Breaking News - 2/10/21
Carole King Gets Rock Hall Nomination on Tapestry’s 50th Birthday
Original Blog - 2/8/21
February 9th is Carole King's 79th birthday, Happy Birthday Carole!
Tapestry, with all of its songs written, co-written and performed by Carole King was recorded 50 years ago in January and released February 10, 1971. It was recorded at the same time James Taylor was recording his new album Mud Slide Slim and the Blue Horizon. Both Joni Mitchell and James (a couple at the time) sing/play on Tapestry as well as James loving and recording King's song from Tapestry, You've Got a Friend. It became a #1 hit for Taylor from Mud Slide Slim as this cross-pollination of friendship and musicianship puts the 'singer-songwriter' as the driving force in rock 'n' roll in 1971.
Tapestry has sold 10 million copies in the U.S. and 25 million worldwide.
It received four Grammy Awards in 1972, including Album of the Year. The lead singles from the album—"It's Too Late" and "I Feel the Earth Move"—spent five weeks at number one on both the Billboard Hot 100 and Easy Listening charts.
Tapestry, topped the U.S. album charts for 15 weeks in 1971 and remained on the charts for more than six years. [The album] held the record for most weeks at No. 1 by a female artist for more than 20 years.
In 2020, Tapestry was ranked number 25 on Rolling Stone's list of the 500 greatest albums of all time.
–Wikipedia
By the spring of 1971, everybody in America knew Carole King and her equally famous Tapestry album cover with her long flowing golden curly hair, sweater and jeans in a teenage boy's hippie dream, perched by the window sill with her gray tabby cat (Telemachus). Most of the Tapestry songs were playing all the time across the radio dial, and the album itself was selling at a blistering pace. 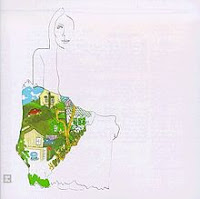 Joni Mitchell's, Ladies of the Canyon (1970) may have gotten a lot of teen girls (boys too) starting to buy records by female singer-songwriters, but Tapestry kicked that up to a whole new mass market level. Women were breaking barriers across the culture, including the growing number of female solo singer-songwriters not relegated to just being a singer or singer in a band. Carole King had in fact, written or co-written many hits for women singers in the 1960's, now she was helping to launch a new day where women could start to create and control their own destiny in the very male-oriented music business. For many young aspiring women musicians in the early 70's, Joni may have planted the dream, and Carole may have planted the plan. 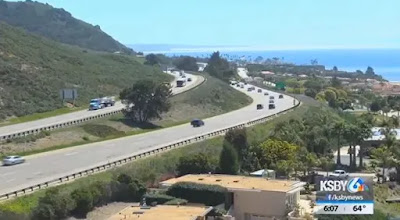 In the summer of 1971, I remember coming home in the car from the beach with friend Tim Patterson driving. I have the distinct memory of that day. I was in the front passenger seat, window rolled down, looking out west at the ocean heading south from Avila Beach, somewhere between Pismo Beach and Shell Beach on the U.S. 101. The sun was shining not a cloud in the sky, Carole King's, It's Too Late*, comes on the radio as Tim and I are silent, just listening to the song, absorbing the sun and central coast. There's a common association of long-term memory with time, place and song. This was obviously one of those moments for me as I can't remember more important details from 50 years ago, but that specific memory came to mind this past week thinking about Tapestry.
That memory triggered a couple more of 1971 or thereabouts, as I briefly hung out with Tim in high school as we both grew up in the same church and also just lived a couple of blocks from each other. Tim Patterson was just a year older than me, and our star center on the Santa Maria High School basketball team. In 1971, Tim a Junior was just getting taller and taller, as I'm going to guess around 6' 8'' or thereabouts at the time. Tim would go on to play four years of basketball as center at Stanford, then two years of professional basketball in Sweden, and later become a lawyer and settle around Palo Alto, California.
By 1971, Tim's older brother, Steve Patterson was the star center at UCLA and is known as the center between Kareem Abdul Jabbar (Lew Alcindor) and Bill Walton years. Steve as starting center at UCLA won back to back NCAA National Championships in 1970 and 1971 with legendary coach John Wooden. Steve Patterson went on to play five years in the NBA with the Cleveland Cavaliers and Chicago Bulls.
Now how this memory relates Tim, Steve and me starts somewhere in time in high school between 1971 or 1972. Tim calls me up and asks me if I want to go with him to the Guadalupe-Nipomo Dunes (Oso Flaco) to ride the dunes in his brother's 4-wheel drive Ford Bronco. Tim picks me up and the two of us head out to the dunes listening to his brother's tapes on the ride out. We get to the dunes and the wind is blowing something fierce where we can't even see the ground with the blur of moving sand.
We're about 15 minutes in, going up and down the dunes when it dawns on me, man I should probably put on my seat belt. No sooner do I snap the belt, than the Bronco crashes down into a small sand ravine about 5 feet deep and wide that neither one of us saw coming. I would estimate the car was going probably about 30 miles an hour when we hit the opposite bank of the ravine head-on and an instant stop. Tim's face hits the rear view mirror just above his right eye and starts to bleed like he's been hit by a left hook from Joe Frazier.* At the same moment upon impact, I hit the front wind shield with the right side of my head. I unbuckle and stumble out of the Bronco with an instant headache. I walk around to Tim, we find a rag or t-shirt in the car and he presses that on his wound to stop the bleeding.
Long story short, a guy in a Jeep comes along and he has a winch on his front-end and pulls the Bronco out from its back-end. We get back to Tim's house and talk to his mom, the nicest lady ever. Anyway, it was either that day or next, the Patterson's discover that my head impact had actually popped out the entire front windshield from its rubber seal. Looking back, I probably had a slight concussion but nobody even thought about that back in the day. Mrs. Patterson did come up to me at church several days later to make sure I was still okay. I think she said something about me having "a hard head," which something I have heard many times since in my life, from two different wives...
This past week, I pulled out the Tapestry album from the combined vinyl record collection from my wife Mary Kit and me. We combined our collections in 2020 after being in boxes in the attic for a long time. She made me laugh when she started to initial all her albums with a black Sharpie, well for, just in case, you never know if it's going to work out... Anyway, Tapestry with the initials 'MK' on the back cover have been playing on the turntable this past week as it certainly primed the pump for this week's blog.
The playlist this week is two halves. First, are the original 12 songs from the Tapestry album. Second, is Carole, Carole and James, or other artists performing songs from Tapestry mostly in the 21st century.
Enjoy my friends, stay well and mask-up.
* It's Too Late, is one of my all-time favorite songs and is on My 100 Songs playlist.
* On March 8, 1971 Joe Frazier defeated Muhammad Ali, staggering Ali in the 11th and knocking him down in the 15th with his staggering left hook. Wikipedia
Posted by Doug McIntosh at February 08, 2021
Email ThisBlogThis!Share to TwitterShare to FacebookShare to Pinterest
Labels: Carole King, James Taylor, Joni Mitchell, My 100 Songs, Oso Flaco Sand Dunes, Steve Patterson, Tapestry, Tim Patterson