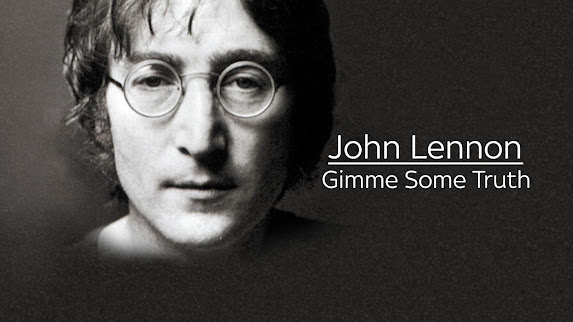 The January 6th insurrection anniversary got me thinking, how would protest songs of the 1960's and 70's relate to these times? I thought about John Lennon and his song Gimme Some Truth.
I'm sick and tired of hearing things
From uptight, short-sighted, narrow-minded hypocritics
All I want is the truth
Just gimme some truth
I've had enough of reading things
By neurotic, psychotic, pig-headed politicians
All I want is the truth
Just gimme some truth
The lyrics fit well into these times because it's easy to switch out the parallel characteristics of Richard Nixon with Donald Trump.
With Nixon we had the Vietnam War, the Government and the white establishment working to maintain their power and self interests.
With Trump you can just switch out the Vietnam War and cultural wars of the 60's with the current cultural war he sparked in 2015, and the real threat his movement aims to accomplish – torching fair vote elections and democracy as we know it.
In the 1960's and 70's, liberals were going up against the Government, FBI, and white establishment for civil rights, social change and to protest the Vietnam War. "Hey hippies, love it or leave it!"
In the 21st century, Trump's conservatives are going up against the Government, FBI, and a more diverse establishment to roll the clock back to the 1950's. "Hey red hats, love it or leave it!"
Trump's BIG LIE that the 2020 Presidential Election was stolen continues to stick with millions of Americans who have completely lost their grip on reality.
Truth has been taken hostage. It started with the far-right side of the political spectrum, which much like the far-left, are both places where bird-brained conspiracy theories nest. But now, that thinking has spread to the core center of the Republican Party where currently 65% of Republicans believe Joe Biden was NOT legitimately elected President.
If 65% of Republicans believe that Joe Biden stole the 2020 election, a sucker is indeed born every minute, and it would appear lives in the fantasyland known as the Republican Party. How smart was Hitler, Mussolini? Is Trump in their league? It's amazing, but I don't think a NATO country of citizens have been manipulated into this level of propaganda since the rise of fascism in the 1930's in Germany and Italy. Trump's dangerous game is brilliantly simple – just continually repeat a double-down lie that is 180 degrees opposite of a basic truth or cultural understanding, goose-step forward and make that bullshit stick to his follower's souls. Then, call the actual truth, "fake news."
The protest song has been around since people formed languages and put words with rhythm. A protest song's purpose is to spear a lie and roast it on an open fire. The great 1960's folk singer Phil Ochs said, "A protest song is a song that's so specific that you cannot mistake it for BS." Wikipedia
From Gimme Some Truth, I then thought of several other protest or socially conscious songs from back in the day that still ring that bell of truth for today's cultural wars, social justice, and a woman's perspective.
So in making the playlist this week, I designed a club sandwich. The bread being John Lennon songs in their time as the beginning, middle, and end. Then adding other 20th century songwriter's mindful songs, with several performed by artists in let's say, "their graying years." And then, a few newer mindful songs and even a little parody thrown in. Let's call this sandwich from the democracy deli, "Gimme Some Truth" on rye, and as Biden would say, "hold the malarkey."
Posted by Doug McIntosh at January 10, 2022
Email ThisBlogThis!Share to TwitterShare to FacebookShare to Pinterest
Labels: John Lennon, Protest Songs