by Doug McIntosh and Paul Hobbs
insurrection, an organized and usually violent act of revolt or rebellion against an established government or governing authority of a nation-state or other political entity by a group of its citizens or subjects; also, any act of engaging in such a revolt. An insurrection may facilitate or bring about a revolution, which is a radical change in the form of government or political system of a state, and it may be initiated or provoked by an act of sedition, which is an incitement to revolt or rebellion. Brittanica.com

It's now one year later, and at least a simple majority of Americans still can't believe what we saw. Something that was so unthinkable, unbelievable, something that could never happen to OUR democracy, in our lifetime.

The January 6th act of insurrection is the culminating event in the cascade of troubling events of Donald Trump's presidency. 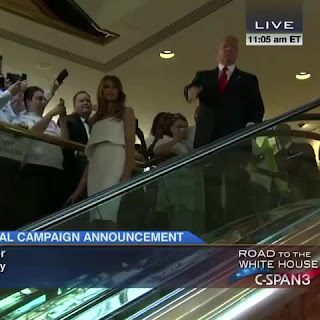 Since 2015, beginning with the Trump Tower golden escalator ride that announced his candidacy (accompanied by the unauthorized use of Neil Young’s, Rockin’ in the Free World), Trump started his run at the Whitehouse with, race-baiting.
In that kickoff speech, Trump said, “When Mexico sends its people, they’re not sending their best. They’re sending people that have lots of problems, and they’re bringing those problems with [them]. They’re bringing drugs. They’re bringing crime. They’re rapists. And some, I assume, are good people.”
The wannabe king used textbook fear mongering to create a divide and conquer game plan. Trump got instant credibility with a substantial core of racist citizens who have been lying in wait for a leader like Trump, to bring them back into the light of day. In Trump they got the born liar they needed to create a movement of hate as he proved amazingly effective starting with his 2011"birther" campaign against Barack Obama. Back then, we thought that was a pretty 'big lie' with the charge that President Obama had been born in Kenya, not Hawaii. Trump was just getting warmed up.
He cleverly used old political 'dirty tricks' that people of color=trouble. This strategy was used to re-energize a working class/middle class base of right-wing Americans who in their hearts of hearts, wanted to 'Make America White Again.' This is lock-step (or goose-step) with their narrow vision of what America serves to be for them, still at the front of the line.
January 6, 2021 was built on a mountain of lies that galvanized his followers into a mobilized mob. As Trump patriots, they traveled in organized groups to our nation's Capitol to fulfill Trump's biggest lie, that the 2020 Presidential Election had been stolen from him, and them.
At the incitement speech pep rally preceding their march to the Capitol, Trump said,
"And we fight. We fight like hell. And if you don't fight like hell, you're not going to have a country anymore.

Our exciting adventures and boldest endeavors have not yet begun. My fellow Americans, for our movement, for our children, and for our beloved country.

And I say this despite all that's happened. The best is yet to come.

So let's walk down Pennsylvania Avenue.

I want to thank you all. God bless you and God Bless America.

Thank you all for being here. This is incredible. Thank you very much. Thank you."
Last week, Paul sent me an audio track of a song he had written about the insurrection titled, Can't Believe What I saw. Paul says, "In this song I reflected on the images of these angry people, many dressed in costumes, firing each other up and violently smashing their way into the Capitol building through policemen, glass and wood. I reflected on the effect it had on those of us watching it unfold. Innocent bystanders who can only watch the horror of the day shown over and over, so we can never forget. And we should never forget."
Then, we worked together on making this YouTube video of Paul's song that we would like to share with you now.
In the year following the attack on the Capitol (to stop the certification process of President Biden's election victory), many lies and blatant denials of the attack continue to shape Trump's subservient Republican Party. My father's Republican Party is in fact dead. It's now solely Trump's party with a host of sycophant Republicans destroying all remnants of the 'compassionate conservative' GOP (Grand Old Party). My new name for the GOP is, Trump’s OFF (Old Fart Fascists).
Trump's OFF Republicans have abandoned any bipartisan efforts to investigate the events of January 6th, much less focus on our nation's critical issues such as: Covid-19, infrastructure, climate change, health care, abortion, immigration, and voting rights, just to name a few.
Trump has done his unbalanced best to divide us as a nation of diverse free thinking Americans. He has successfully unbalanced the Supreme Court to support conservative-christian causes and manipulated many faith-based Americans. Being raised in a conservative Baptist household, it is particularly interesting to me to see how the Christian right so easily admires Trump's (and Putin's) 'one way' authoritarian brand of government to further their own ideological causes. The far right has long mastered the political art of converging issues such as anti-abortion with second amendment gun culture, and now, vaccinations and masks with their perceived loss of liberty. It's actually crazy... smart, as a means to an end, but I don't remember an anti-polio-vaxxed Jesus packing a Thompson machine gun in my Sunday school classes in the 1960's.
Turning back the clock to the 1950's – before progressive civil rights, social, and environmental movements – is Trump's long game. He gives the conservative and Christian right-wing their pet project issues in exchange for their complete support as to when and how he can form a totalitarian government to consolidate his power. It's still truly amazing that millions of Christians support this well-documented amoral creature who are so complicit in their complete admiration of this malignant narcissist. It's just another red flag in a sea of red flags that our democracy is much more fragile and in serious peril than anyone would have imagined before the 2016 election.
Trump's demonstration of that power is his famous 2016 statement, "I could stand in the middle of Fifth Avenue and shoot somebody and I wouldn’t lose voters." If you don't recognize that Mussolini-like puff of the chest and turn of the head metaphor, you haven't been paying attention to his out in the open fascist movement, cloaked in the American flag. Paul says, "Trump is the architect of the whole demoralizing journey our democracy has embarked upon. We can’t forget him. We owe it all to him. He has opened the Pandora’s box that now haunts our dreams."
Just one year ago, thousands of Trump supporters tried to overthrow our democracy, in the name of democracy. In the irony of all ironies, a Trump supporter is captured on video beating a police officer with an American flag attached to a flagpole.
The events of January 6, 2021 will not be swept under the carpet by Trump's political cronies, or his enraged Americans thinking their liberty is being taken from them by people of color, liberals, atheists, vaccinations, whoever or whatever.
As we start this new year and move to the 2022 mid-term elections, the next iteration of the insurrection is already happening leading to the 2024 general election. However, this next phase is going to be non-violent in what election experts are calling, a 'slow-motion insurrection.' Trump's GOP is evolving, its fascist focus now turns towards controlling local, county, and state election boards starting in the battleground States that Biden won in 2020. But make no mistake, the long game to dismantle our democracy will be a national effort to control elections in all fifty States. If you are reading this and saying, "that will never happen in America," please be mindful and alert no matter your political stripes.
The very people who attacked the Capitol last year are represented and backed by millions of people in this country who are fed up with our democracy because they feel it no longer works for them. The large  social/political chip on their shoulder has progressed for many into rage. Trump's supporters separate themselves from our Union, calling only his followers, "patriots" and claim the American flag as their own. With Trump's presidency they are emboldened. They feel they have an 'us vs them' large window of opportunity to smash through – to create a new nationalist government that looks after America's traditional Christian majority interests and beliefs as their nation, under their God.
All this comes as the Republican Party has become more aligned behind Trump, who has made denial of the 2020 results a litmus test for his support. Trump has praised the Jan. 6 rioters and backed primaries aimed at purging lawmakers who have crossed him. Sixteen GOP governors have signed laws making it more difficult to vote. An Associated Press-NORC Center for Public Affairs Research poll showed that two-thirds of Republicans do not believe Democrat Joe Biden was legitimately elected as president.

The result, experts say, is that another baseless challenge to an election has become more likely, not less.

“It’s not clear that the Republican Party is willing to accept defeat anymore,” said Steven Levitsky, a Harvard political scientist and co-author of the book “How Democracies Die.” “The party itself has become an anti-democratic force.”

American democracy has been flawed and manipulated by both parties since its inception. Millions of Americans — Black people, women, Native Americans and others — have been excluded from the process. Both Republicans and Democrats have written laws rigging the rules in their favor.

This time, experts argue, is different: Never in the country’s modern history has a a major party sought to turn the administration of elections into an explicitly partisan act. Nicholas Riccardi, AP News
Now, when you have time this week, Paul and I would encourage you to watch the following 40 minute video below, Day of Rage: How Trump Supporters Took the U.S. Capitol. This video was written and edited by a group of New York Times reporters who spent six months putting together the chronological order of the events of January 6th. It is important to note that most of the video taken on 1/6/21 was shot by Trump supporters themselves. This footage is all real. There are no Antifa actors borrowed from the fake moon landing Hollywood movie set. We can never forget what happened on that day, or be suckered by Trump's political hacks that this was just a normal "tourist" day at the Capitol. We believe what we saw.
Also, heed a Trump supporter's comment at the end of this video to a group of police officers on the line on January 6th, "The patriots are coming back y'all. Hopefully y'all be on our side when that happens."
Note - For some reason, the NY Times starts their video somewhere in the
8:00 mark (in the Chrome Browser).
Just slide the play bar back left to 0:00 to start.
References
Posted by Doug McIntosh at January 03, 2022
Email ThisBlogThis!Share to TwitterShare to FacebookShare to Pinterest
Labels: Donald Trump, Insurrection, Paul Hobbs