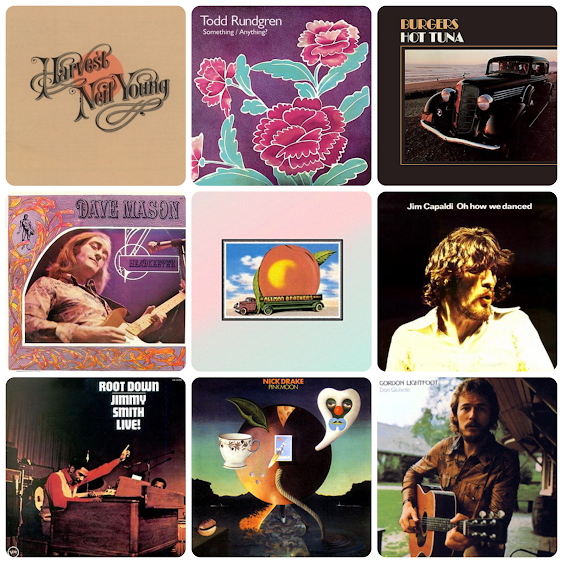 Paul, I guess we were just two young and stupid consumer capitalists feeding the corporate record gods. Geez and 1972 was a good music year too... but not as great as 1971...
•••••••••••
1972 is a continuation from the late 60's of all these wonderful bands just falling apart and members making solo albums or forming new splinter bands. This past week, I thoroughly enjoyed listening to Hot Tuna, the break-off project of Jefferson Airplane's members Jorma Kaukonen (guitarist/vocals) and Jack Casady (bassist). I also enjoyed Traffic's Dave Mason and Jim Capaldi's solo albums. But that lead me down the path of 'what if' these bands had just stayed together and made better albums together with their mothership bands. I guess it was just 'too soon' at the time with my break-up traumas of The Beatles and CSNY. Hell, I still haven't gotten over that, not to mention the late 60's break-ups of Buffalo Springfield, The Byrds, and The Mamas & The Papas.

Speaking of  The Beatles and 1972, let's finish this installment with my recommendation to watch Good Ol' Freda. (Here is the link on Amazon Prime.) This is a 2013 documentary about The Beatles secretary, Freda Kelly hired by Brian Epstein when she was only 17 years old. She was also the The Beatles fan club president and worked for them from 1962-1972. I came upon it the other night and thought it was fantastic.

Enjoy the playlist my friends!