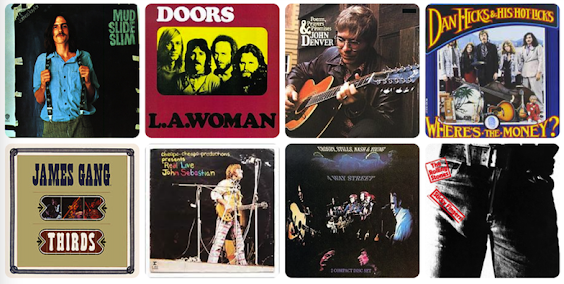 The last couple of weeks I've featured two entire albums from April 1971, James Taylor's Mudslide Slim and the Blue Horizon, and the Rolling Stones' Sticky Fingers. A complete album feature is often the kiss of death in terms of people hitting the blog post and/or sampling the playlist. I did take a drop in the hit count these past couple of weeks, but for 1971 we are still very much in the sweet spot of the classic generation of the rock 'n' roll era, and I plan on featuring more entire albums in the months ahead from fifty years ago, and the continual roll in time.

John Denver's Poems, Prayers & Promises was not on my hit parade in 1971, but by the time I became
a summer camp counselor for individuals with disabilities in 1976 at Camp-A-Lot on Palomar Mountain, John Denver was in heavy rotation at the campfire sing-alongs. I'm tripping back right now to a memory of friend Mark Hunter playing and singing Sunshine On My Shoulders with the band of acoustic playing counselors while a beautiful young camp counselor named Kim provided sign language with a ton of good vibes interpretation.

I believe in the summer of 1977, John Denver did in fact visit the Palomar Observatory for a television special he was filming that featured some of our campers from Camp-A-Lot, and a dream come true for many of them to see and interact with him on that day... take me home country roads.

Where's The Money (1971) is another album that didn't register for me until the summer of 1973 when I started dating a special girl who turned me on to the very funky and funny swing band, Dan Hicks and His Hot Licks. She had all of Dan's albums, with one of my favorite songs ever... How Can I Miss You When You Won't Go Away?

In 2014, I reconnected with music in a big way after years of doing the day job career thing. That special girl and I wanted to start going to concerts again, and she found out online that Dan Hicks would be performing just north of San Diego, in Escondido. We hopped at the chance and got tickets right away, as this was to be our first concert together after many years. Shortly after, we found out the show had been cancelled as Dan had developed both lung and liver cancer. Dan Hicks died in 2016, and we didn't get that chance to see him live. I'm sure his many fans miss him dearly, and I never skip his songs when one comes on during a run.

This past week I also enjoyed listening to John Sebastian's, Cheapo-Cheapo Productions Presents Real Live John Sebastian (1971). Like Dan Hicks, Sebastian's a good musician and terrific entertainer who puts a smile on all who listen to his records or see him live. John Sebastian, born in 1944 and raised in Greenwich Village grew up in what would be the epicenter for folk music in the early 60's and is part of the folk and rock 'n' rollers that influenced a generation, and... a younger girl keeps rollin' 'cross my mind.

Posted by Doug McIntosh at April 19, 2021 No comments:
Email ThisBlogThis!Share to TwitterShare to FacebookShare to Pinterest
Labels: Fifty Years of Music 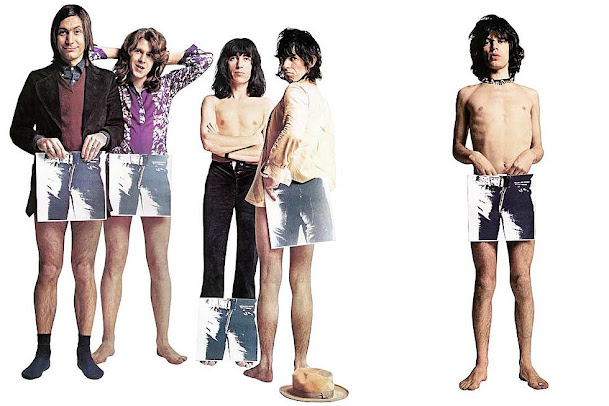 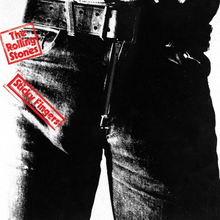 Opting for the above promo photo shoot for the Rolling Stones 1971 album, Sticky Fingers is probably the better decision than blowing up the Andy Warhol designed album cover.

By 1971, 'The Stones' weren't holding anything back with the new album title and cover photo, and were certainly living up to the band's shortened name.

As iconic as the Sticky Fingers cover was with its functional zipper the bad boys of rock had just left their record label Decca and Mick wanted a new logo for their own record label.

A London artist, John Pasche who had done some poster work for the band, created the lips and tongue logo over a weekend for 50 pounds (around $76). The logo was first introduced as the inside cover sleeve of Sticky Fingers and has now gone on to be the band's logo for fifty years. The tongue and lips graphic is in fact the most famous of all band logos, if not one of the most recognized icons used on t-shirts and promotion products around the world.

The logo pictured above was used to commemorate the band's 50 Year Anniversary in 2012, and works well here for the 50th year of Sticky Fingers, a masterful album full of hits with new bandmate Mick Taylor aboard for his first full-time studio Stone's album.
Here's the complete Sticky Fingers with a couple alternate tracks including my mix from the Sticky Fingers Deluxe and Super Deluxe Editions of live tracks in 1971 as your must listen to playlist this week to get you rolling.
Enjoy my friends, stay well, and zip-up!
Posted by Doug McIntosh at April 12, 2021 1 comment:
Email ThisBlogThis!Share to TwitterShare to FacebookShare to Pinterest
Labels: Fifty Years of Music, Sticky Fingers, The Rolling Stones

Fifty Years of Music • Mudslide Slim and the Blue Horizon 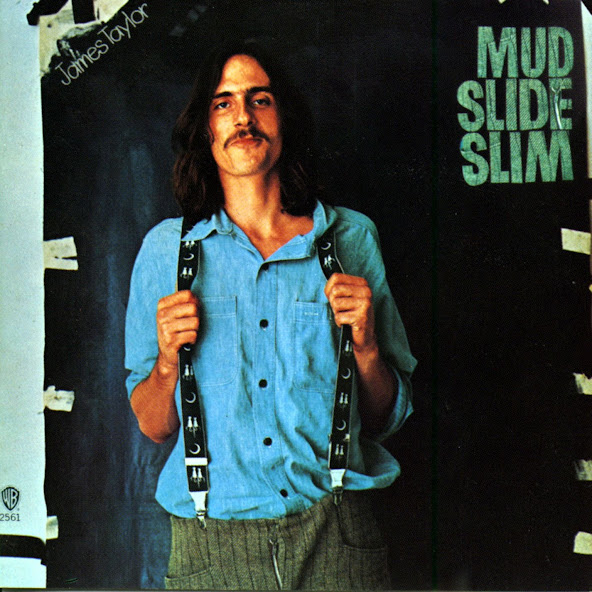 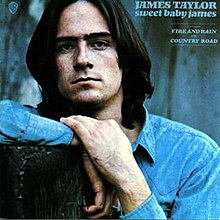 My first thought after looking at James Taylor's third album, Mudslide Slim and the Blue Horizon was, is James wearing the same blue shirt as his second album, Sweet Baby James? After examination, they're two different shirts, but wait a minute, yes he's wearing another blue shirt on his fourth album, One Man Dog.

What's my point? I don't really have one. You've just got to love the simplicity that is James Taylor and maybe his fondness for the color blue. During this time in James' life, he was going with Joni Mitchell as she sings backup vocals on three Mudslide Slim songs. I've always loved their voices together. In June of 1971, Joni would release her now revered album, Blue, so maybe a theme was developing.
Here's a 1970 live version of You Can Close Your Eyes, a song James wrote for Joni, where they did a couple of shows together in Europe. Man, what I would have given to have been there. I've always loved this version as a duet with two of the best of all-time during this magical time of acoustic music.

Here's a great story by James about being with Joni Mitchell.
Here's a video by Peter Asher about the making of Mudslide Slim.
Enjoy my friends, stay well and mask-up.
And, here is Mudslide Slim and the Blue Horizon, released in April, 1971.
Posted by Doug McIntosh at April 05, 2021 3 comments:
Email ThisBlogThis!Share to TwitterShare to FacebookShare to Pinterest
Labels: Fifty Years of Music, James Taylor, Joni Mitchell, Peter Asher
Older Posts Home
Subscribe to: Posts (Atom)