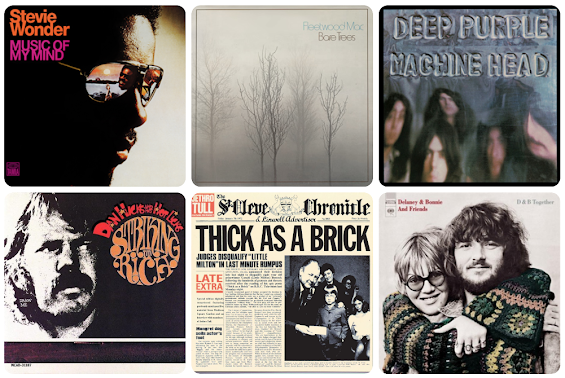 Fifty years ago this month, I turned seventeen. A year later, I would meet my second girl friend, and as it would turn out many years later, my second wife.

In the spring of 1973 I met a lovely girl who sat behind me in Miss Dunn's English class. She would in fact be that second girlfriend who introduced me to many things, one of which being the very talented and funny, Dan Hicks and His Hot Licks band. Striking It Rich was Hicks' third album released in March, 1972 which I wouldn't hear until the summer of '73. When I listened to it this past week, the memory association of music in space and time really came rushing back.  I remember sitting in her family room listening to this album. It was early on in our relationship and I'll never forget the song, I Scare Myself,  which seemed spot on at the time. Dan Hicks and His Hot Licks is a great example of me being a young and stupid teenager getting exposed to different music that I normally would have never listened to. In this case, Hicks' use of country swing mixed with a bit of jazz along with a healthy dose of humor thrown in got me listening to a new band with this very intriguing girl.

Stevie Wonder's Music Of My Mind would do the same thing. This album comes just at the beginning of Stevie's magical run in the 1970's that would make him one of the biggest musical stars of all-time. The elements are all coming together within Music Of My Mind as Wonder starts to reshape R&B, pop, rock 'n' roll and jazz, and roll it all together into Stevie Wonder music. I will also say that Stevie Wonder more than other black artist, (even Smoky and Marvin) got white kids in the 70's buying more than black artist's singles, but now their albums too.

Bare Trees is one of my favorite Fleetwood Mac's albums and is actually the album that got me listening to the band as they began to move further from their Brit Blues roots to rock 'n' roll and then pop with the revamp of the group in 1975. This is the album that I fell in love with Christine McVie's songs as I think she's one of the most underrated composers and singers in rock 'n' roll history. This album also features Danny Kirwan and Bob Welch who really helped define the Fleetwood Mac sound. Many people only know Fleetwood Mac after Stevie Nicks and Lindsey Buckingham joined the band in 1975, and the older material is often forgotten and received very little air time after the mid-70's.

Two successful rock 'n' roll bands from the 60's that made the transition to stadium 'Rock' in the 1970's were Jethro Tull and Deep Purple. Both released albums in March, 1972 and I will have to say Deep Purple's Machine Head really holds up.

As 'Metal' developed into a sub-genre in the 1970's, that loud arena sound became associated with lesser talented bands than their Tier 1 predecessors like Deep Purple. Led Zeppelin of course became the premier hard rock band of the 70's but Deep Purple were also a great rock band that didn't quite get its due. Machine Head is a great classic rock album says the guy who didn't listen to a lot of straight-up Marshall amplifier rock music back in the day.

Lastly, I'll mention Delaney & Bonnie's last album together, D&B Together who in real life were just months away from a divorce. As I have gone back and listened to their albums over the past couple of years it strikes me how much Eric Clapton had co-opted their sound in the early 70's and Delaney and Bonnie were pretty much forgotten after this album, while Clapton took that sound to the bank.

Lay down Sally, enjoy my friends.

Posted by Doug McIntosh at March 14, 2022
Email ThisBlogThis!Share to TwitterShare to FacebookShare to Pinterest
Labels: #FiftyYearsOfMusic, 1972, Dan Hicks and His Hot Licks