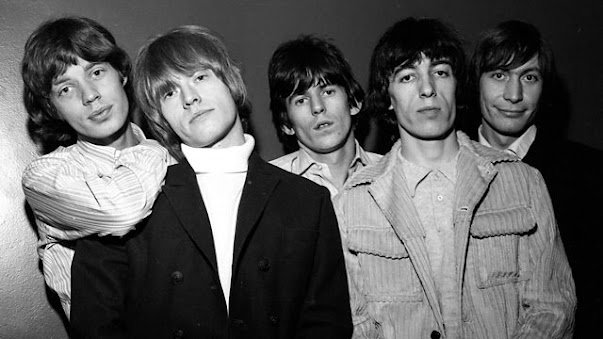 Let's keep the ball rolling with the FAV FIVE Series by moving from the recent readership participation of creating a group Beatles playlist, and last week, The Bob Dylan playlist.
This week, your assignment should you choose to accept it-
LIST Your FAV FIVE: Rolling Stones Songs.
You will make your list in the Comments section at the end of the blog post below.
So to begin, let's start at the end. The big idea is for all of us to create a Monday Monday Music™ Readers: The Rolling Stones Songs Playlist.
I'll start the playlist with my favorite five Rolling Stones songs and then, as readers leave me their five in the Comments section below, we will grow the playlist together. Note- I'm sure we will have duplicates which is great, but I will only include a song once in the YouTube playlist as I receive the lists.

Songs must be original Rolling Stone compositions recorded by the band themselves. So, no covers from other artists doing Stones songs, which is another whole blog in itself that I will do someday.

So here's my five (at this moment) to kick this thing off.
Now if you want a little help in making your list, here's a great resource.
Also, here's the same little tutorial I made for The Beatles list.
Thanks in advance for playing along and come back later in the week to listen to OUR growing playlist!
Posted by Doug McIntosh at March 28, 2022
Email ThisBlogThis!Share to TwitterShare to FacebookShare to Pinterest
Labels: FAV FIVE, The Rolling Stones