Songs That Piss People Off • No. 1 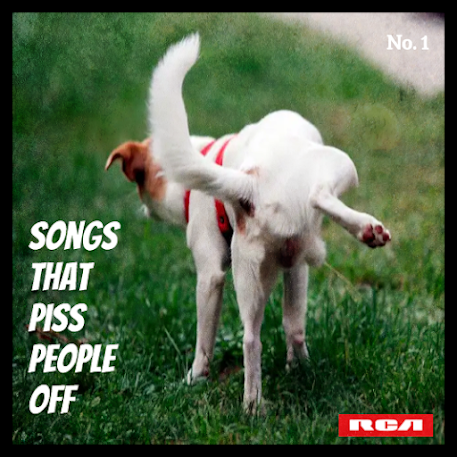 Songs That Piss People Off: No. 1 is a satirical album I dreamed up one day back in 2020 during the lockdown phase of the pandemic. My state of mind at the time was to put together 12 song titles with the ability to piss off or even get a laugh from my readers depending on their personal or political perspectives. My goal was to be an equal opportunity offender where I would be successful with at least one title pushing one of your buttons. Hell, several of these titles pushed my own buttons when they came into my head.
This blog has just been sitting in my drafts folder and for some reason I decided to pull the publish trigger and just let this one fly. Actually, I know why I picked this week is because this shit just doesn't seem to go away. Many of these titles are simply ongoing themes of life in America that I could have coined yesterday.
Anyway, I had fun designing the album jacket and you can only imagine what my "Number 2" album cover is going to look like.
Here's the titles with no explanations or apologies.
Note- If I didn't piss you off this round, I hope to do better next time.
Bonus Track - 1,000,000 Inconveniences
At some point, I shared these titles with my buddy and guest writer for Monday Monday Music™, Paul Hobbs. Paul and I got to talking about actually writing some songs from these titles and then we settled on, A Million Inconveniences.
That whole collaboration resulted in Paul writing the lyrics and music for the song that he recorded and was featured in the Monday Monday Music blog,  A Million Inconveniences on May 9th, 2022.
What was so great about working with Paul is that he encouraged me to write some lyrics of my own. I did that and he then went to work again and recorded a whole new song with the same title with my lyrics (this one with the number in the title, 1,000,000 Inconveniences).  He also wrote new music for this second perspective on the theme of a million people dying of Covid-19 during the past two years. Paul is a very special person, and anyone would be honored to be his friend and now for me, an ongoing collaborator.
I thought this might also be a good time to release this second version as Covid cases (+11%) and hospitalizations (+18) are both up again.  As this latest strain, Omicron subvariant BA.5 becomes dominant, everybody now has family and friends, all vaccinated testing positive for Covid. I'm just so thankful for the Covid-19 vaccination for all ages NOW as my youngest two grandchildren under 5 were recently able to get their first shots.
Covid-19 is NOT going away, and probably never will. All of us will eventually get it, but again I'm so thankful we have the medical technology through vaccinations, boosters and medications like Paxlovid to greatly reduce the symptoms and not put larger numbers in the hospital as in 2020-21.
Since the May 9th blog, 17,000 more people have died from Covid-19. Deaths are down to about 300 a day in the U.S. but as in all tragedies like this, the simply phrase, "We can never forget" is still appropriate and ongoing.
So here's our reflection after two years of the pandemic in a song. It's a sarcastic response to the naysayers, deniers, liars, selfish, and pussies who simply can't tolerate a little mask, all wrapped in the American flag with the misconception that their personal behavior trumps the collective safety and liberty of the many. Grow up and face adversity like the generations of Americans before us. Piss off.
And, what a feeling to say, "I co-wrote a song" for the first time in my life. Thank you Paul!
Posted by Doug McIntosh at July 11, 2022
Email ThisBlogThis!Share to TwitterShare to FacebookShare to Pinterest
Labels: A Million Inconveniences, Covid-19, Paul Hobbs, Songwriting