Hey, the 70's called and want you to listen to some lads in their 70's 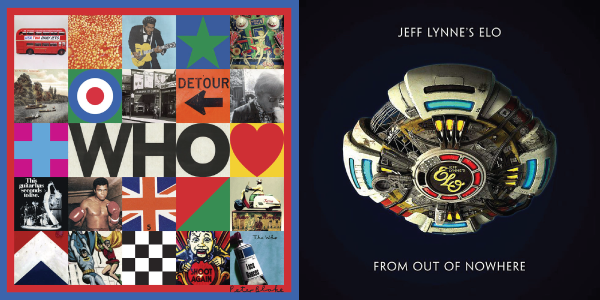 The Who's twelfth studio album, WHO was just released last week but you would swear it was straight out of the 1970's. Roger Daltrey at 75 still has his vocal chops and is a model for how to take care of one's self. Pete Townshend at 74 still has his songwriting, singing and guitar chops, and together these lads just made a fan pleasing classic album to go with their current tour.

I finally saw the band for the first time on their tour stop in San Diego this year, and this album will just keep The Who selling out arenas until they say, "WHEN." This just might be the best rock 'n' roll album of the year as I'm picking songs right and left here to include on my year ending blog, My Favorite Songs of 2019. I've got both a Spotify and YouTube Playlist of the new album.

WHO (Deluxe) on Spotify

Next up is almost 72 year old (Dec. 30th) Jeff Lynne and his band now updated from ELO to Jeff Lynne's ELO. Jeff wrote every song and plays every instrument (minus the orchestration) on the new album just released in November, From Out of Nowhere. Much like the new album title, ELO is back with new material to keep the fan base rocking on tour that I caught for the first time this past June at the Honda Center in Anaheim. Jeff Lynne just blew me away at this show with his voice preserved like a 1970's time capsule that continues to blast off on this new album. I saw a lot of bands and solo acts in 2019 (including Paul McCartney) but I have to say, Jeff's performance at the Honda Center had the highest sound quality production of any live act I heard in 2019. This new album will take you back and forward at the same time.

Here also, I've got both a Spotify and YouTube playlist of the new album.

With these two new 2019 releases, these rockers all born in the 1940's continue to prove why they are part of the greatest generation of Rock 'n' Roll.

From Out of Nowhere on Spotify

Posted by Doug McIntosh at December 16, 2019
Email ThisBlogThis!Share to TwitterShare to FacebookShare to Pinterest
Labels: Jeff Lynne's ELO, The greatest generation of Rock 'n' Roll, The Who