Background
David Crosby, Stephen Stills, Graham Nash and Neil Young came from successful bands. The Byrds, Buffalo Springfield, and The Hollies, collectively had more than a dozen hits in the middle sixties. But by 1968, Crosby is kicked out of the Byrds, Nash stifled and frustrated in the Hollies, and Stills, who’s band fell apart just as it seemed poised for greater things, were drifting, looking to be a part of something else.

Neil Young, Stills’ former bandmate in Buffalo Springfield, had left the band, came back, and left again, his final departure coming as they were preparing to play the Tonight Show, a major milestone in a young bands rise. Neil was not drifting. He embarked immediately on a solo career, releasing Neil Young in 1968, and Everybody Know This is Nowhere in 1969. He did not look back.

Crosby, Stills, and Nash had found each other in Laurel Canyon, joined forces and released their self-titled stunning debut album in May of 1969 to great acclaim.

It all seemed to make perfect sense...

That was... until Ahmet Ertegun, the President of CSN's record company (Atlantic Records) made a bold suggestion to have Neil Young join the band and go out with them on their first tour together. After some wrangling among the three founding members, all agreed to have Neil join the band as a full member to become Crosby, Stills, Nash & Young.

Fan Fantasy
If you are a loyal reader of Monday Monday Music, you know this subject has been well covered before in the May, 2019 blog-
Crosby, Stills & Nash - Celebrating 50 Years of Their Debut Album. In that blog, I (Doug) take the 'what if' position that Ertegun does not make the suggestion for Young to join the band and CSN is lead by Stills as that band continues to develop as a harmonious trio.

In my March 23rd blog this year, I wrote about the 50th anniversary of Déjà Vu • March, 1970. My co-author this week, Paul picks up on that read, and we start to bat around the notion, "What if Neil didn't bolt (again) after the 1970 Déjà Vu Tour." So this week, we are going down the rabbit hole together with the fan fantasy that Neil is either hit by lightning or better, sees a 1950's Pontiac Hearst on Sunset Blvd when he returns from that 1970 tour and has an epiphany- He's going to stay with Stills this time and be the greatest American band (even if he is from Canada, and Nash is from England).


Back to Reality for a Moment
Like CSN, CSNY wanted to be an even a bigger supergroup of individuals and declared that up front with their last-name-band-name brand. This was done by design as all band members intended to use CSN and now CSNY as a springboard for having solo careers basically following Neil's solo album playbook. By Neil agreeing to join CSN and CSN agreeing to sign this talented free agent, they were all literally banking on all-star name recognition for a lifetime, with Neil posed in perfect position to be a superstar.

CSNY's second gig together as the new band was not just any tour stop, it was the Woodstock Festival, August 18, 1969. In what would be the start of countless dysfunctional acts among the group, Neil refused to have himself filmed at Woodstock and threatened the cameramen if they took any pictures. Most fans didn't even realize Neil was at Woodstock until years later.

In March, 1970 CSNY released Déjà Vu and it tops the charts as the band intentions are fully actualized. (Déjà Vu, reached number one in several international charts in 1970, and remains their best selling album, going on to sell over 8 million copies with three hit singles. Wikipedia) 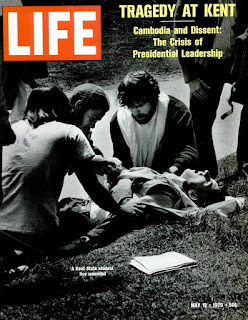 On May 4, 1970 unarmed college students are shot at by the Ohio National Guard at Kent State University in Kent, Ohio, during a mass protest against the bombing in neutral Cambodia by United States military forces. Twenty-eight National Guard soldiers fired approximately 67 rounds over a period of 13 seconds, killing four students and wounding nine others, one of whom suffered permanent paralysis. Wikipedia

David Crosby takes the May 15th, 1970 Life Magazine to Neil Young and encourages him to write the song Ohio, which he completes very quickly. The song is rehearsed by the band and recorded on May 21st in just a few takes. It is released in early June and climbs to #14 on the Billboard charts.


Today is the 50th Anniversary of the tragedy at Kent State. Let's just take a moment...

As young teenagers, Paul and I lived the Vietnam War and antiwar protests through our TV sets. The song Ohio brought the war and protests directly to our music listening as a single on our local AM radio station. CSNY opened a door to the the counterculture for many young people living in little towns like our's across America. Their music was powerful for a couple of young hippie wanna-be's as CSNY had more songs in the wings for our budding political awareness.

After releasing Ohio, and the 1970 summer tour, CSNY were on top of the world.

It all seemed to make perfect sense...

Then as quickly as it all came together, the band dissolves. So instead of a 4 Way Street coming together as a musical intersection, it's really four one-way streets all driving away from each other.

During 1970-1971, all four members made solo albums, and CSNY never attains the critical acclaim and chart performances from the original two classics Crosby, Stills & Nash, and Déjà Vu.

'What If' Pure Fan Fiction
It's July of 1970 and CSNY take the summer off from the second part of their 1969-1970 Tour. All four have agreed to meet in Los Angeles for mid-September rehearsals and recording for their third studio album scheduled for a December release date, and just in time for Christmas shoppers.

The young men, all previously intending to release solo albums in 1970 or 1970 have developed a killer instinct. They now know they have something special and this third CSN/CSNY album would put them in an elite class with the big three: The Beatles, The Rolling Stones, and The Who. And hey, The Beatles have just broken up in spring 1970, and CSNY sees their band moving into that big three band slot.

During that first tour, the band mates talked about the Stones and how they somehow managed to stay together as a team being, "all in." That phrase has kind of stuck with the boys and on July 9th in a Bloomington Sports Center dressing room (after their last first tour performance), agree to title the upcoming third album, All In.

All In • Release Date: December 7, 1970
All In represents a complete collaborative philosophy as the band wants to capture the spirit of making their first album, Crosby, Stills & Nash. They are actually practicing Music is Love, not only in a hippie sense, but by each band member bringing in their best songs for the group album, it becomes a critically acclaimed hot selling classic.

From a business sense, the boys play the long game and will be much richer in the years ahead over the sales of their individual albums. (How come countless bands can't see this, other than being young and stupid drugged out self-loathing egomaniacs.)

If they're smart, they will take all the songs from the four 1970-71 individual albums not yet used, plus new songs always coming and continue to make CSNY albums, but only bringing in their best material for much of the 1970's. How's that for some historical fiction!

And in a last fan fantasy footnote-
Historically, they are not viewed as a wash out band by the mid-1970's with only two great albums to carry their legacy decades down the road and most everything Wasted On The Way.

All in • Album Design
In creating our fake album, Paul and I wanted to capture the band's involvement in the Vietnam antiwar movement. The back cover photograph was taken at the Fillmore East. With a little help from Photoshop, I gave the album jacket a textured feel. We both remember getting Déjà Vu and Neil Young's Harvest (1972), where you not only heard the albums, but you tactually experienced them as well. 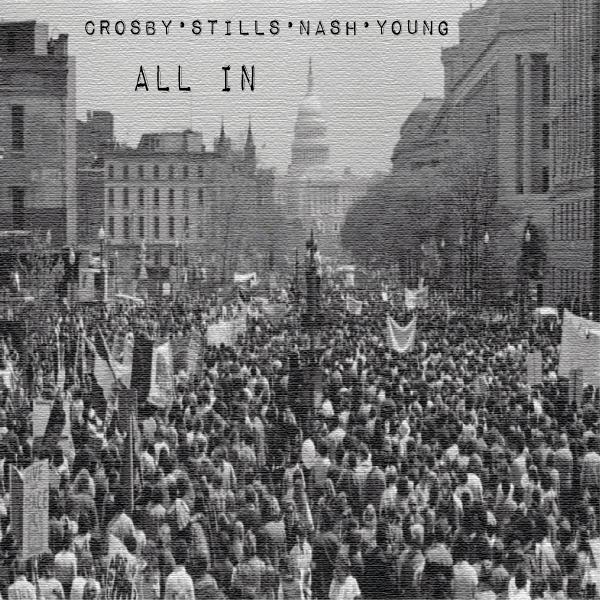 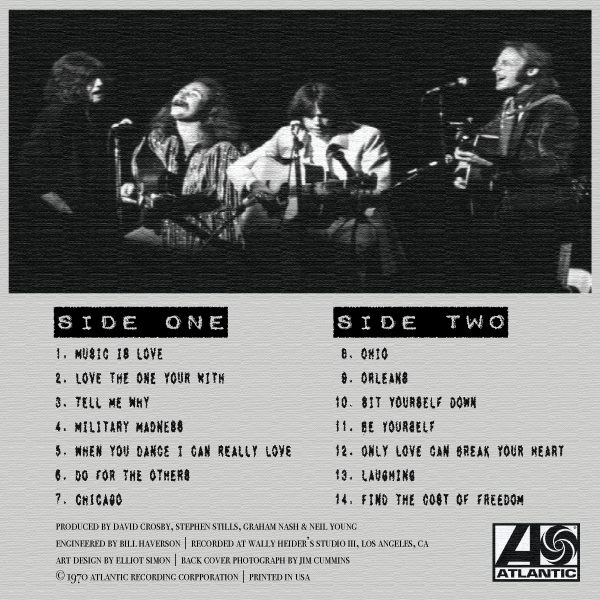 Ladies and Gentlemen
Crosby, Stills, Nash & Young • All In

Posted by Doug McIntosh at 7:01 AM