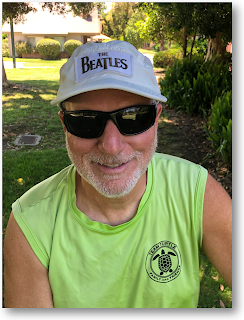 Inevitably, a Beatles song will come on during my run because I know I checked every demo, song and/or album in Amazon Music regarding 'The Beatles.' Let's say, Baby You're A Rich Man comes on. Do I skip a Beatles song just because it's probably going to be the #BestSongIHeardToday? I have to give some other artists a fighting chance to make my playlist.

On the trail, I've had so many people tell me, "Love your hat!"

I have started to think of my Beatles hat as sort of a 'friendly ambassador.'

People out for a walk with their dog or young children have that built-in ambassador of friendship right next to them as folks who wouldn't normally give them the time of day, will stop someone dead in their tracks to talk to their dog or toddler.

Now ever since my wife Mary Kit sewed on The Beatles logo to my running hat a couple of years ago, I've noticed a change in how people see me on the trail. Before, they may be thinking, "Whose this old fart coming my way?" Now I get more smiles and "Howdys" when I have my Beatles hat on.

So my Beatles hat can put a smile on somebody's face, and it puts a smile on my face to think those four guys brought so much joy to people around the world, and in fact have made the world a better place.

I strive to be the good ambassador under the hat, even as an unleashed dog is lunging for my crotch, or mountain biker suddenly passes me from behind at break-neck speed on the four foot wide trail, going for his world record. Hey, we Beatles fans got to represent.